SIT-IN How Four Friends Stood Up By Sitting Down 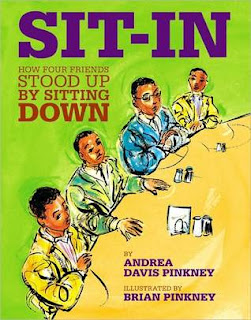 Summary: SIT-IN How Four Friends Stood Up By Sitting Down, by Andrea Davis Pinkney, involves 4 young African-American men who took a stand for the injustice of segregation.  Following Dr. Martin Luther King Jr.'s ideas about non-violent protest, these men sat down at a "white's only" counter at a restaurant and ordered a simple meal.  In the beginning, the men were ignored and the employees acted as if they weren't even there.  After coming back day after day and continuously being ignored, other individuals decided to "sit down"with them, including white men.  By taking the criticism from others, having food thrown at them, and not being served, these men and other individuals were standing up for the equality of all individuals.  Because of situations like this, the Civil Rights Act of 1964 was created in order to eliminate future problems containing segregation.


Element 4: This book refers to the social justice element of social movements and social change for numerous reasons.  These 4 men came together and addressed/protested issues in regards to the injustice of segregation.  They continued to got to the restaurant on a daily basis, and with the help of other individuals who got involved, they made a change in the world.  Because of them taking a stand, the Civil Rights Act of 1964 was created, and it shows the readers how important it is to stand up for what you believe in order to make a positive change.


Activity: After reading this book with my classroom and having a mini class discussion about their thoughts and opinions, I would have each student take out a journal.  In that journal, I would have them pick a specific part in the book that they felt strongly about, and describe why they liked it the most.  In addition, I would have them write how/why it was an important aspect of the book as as whole.  After having the kids do this individually, I would bring them together as a class to share what they have written in their journal.  I would jot down these ideas on the board, and have the class pick their 4 or 5 favorite scenes.  Lastly, in groups, I would assign those scenes and have the children draw their own picture and write down what was happening.  We could hang them in the room as a reminder of the book, and to show kids how important social movements and social change are in the world.