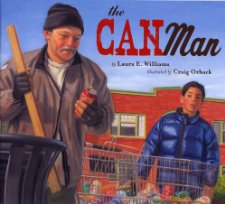 The Can Man is a homeless man who used to live in Tim’s building until he lost his job and now collects cans for cash. When Tim’s parents tell Tim that money is tight and they are unable to afford a skateboard for his birthday, Tim decides to collect cans to earn the money himself. Tim collects cans in the opposite direction of The Can Man and is able to collect several bags, leaving The Can Man with an empty cart. One rainy day Tim bumps into The Can Man, and learns that he is trying to save money to buy a new coat before winter, but has no cans to cash in. The Can Man helps bring Tim's bags of cans to the recycling center in his shopping cart. It takes Tim a while to push all the cans into the redemption machine, and by the time he is done The Can Man has left. Tim notices it is beginning to snow and runs out with the money to find The Can Man. Once he finds The Can Man, Tim hands him the money and tells him to have it. Even though Tim isn’t able to afford the skateboard, it doesn’t seem to matter anymore. The Can Man needed the money more than him. The story ends with The Can Man giving Tim an old skateboard that is repainted for his birthday.

This book relates to Element 5, Raising Awareness, because it teaches students about homelessness and how they can help others in need. Students will learn about the small acts of kindness they can do to help homeless people that live in their neighborhoods, just like Tim did. Although Tim started collecting cans for his own good, he became aware of the needs of The Can Man and how he had the power to help The Can Man.

After reading the story to the class, I would have students think-pair-share about other ways in which Tim could help The Can Man. I would have the students share their responses, and discuss with the class how each of us has the power to help others in need. I would then have each student write about a time in which they helped someone in need and reflect on how that made them feel.
Posted by Unknown