You Forgot Your Skirt, Amelia Bloomer! 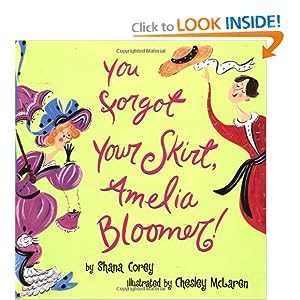 Amelia Bloomer is sick and tired of always being uncomfortable! Because this book takes place in the mid-nineteenth century, in order to be considered a 'proper woman' women were forced to wear extremely uncomfortable and heavy clothing such as wide hooped skirts, and corsets. Amelia not only wishes to change the fashion choices of women, but also the rights that women are able to receive. During this time women who worked were frowned upon, and women were also not allowed to vote. Amelia decides its time for a change and becomes actively involved in gaining more rights for women. Amelia starts her own newspaper in an attempt to change the voting laws. She also begins wearing a new style rather than her normal skirt called 'bloomers' or baggy pants. By the end of the story, Amelia's new fashion is trending throughout all of the women in the neighborhood!

This topic relates to Element 4 because it shows that Amelia feels so passionately about the mistreatment of women and because of this, she decides to do something about it. She does not simply accept things the way that they are, she realizes that even though she is just one person, she has the power to change the views and actions of people if she tries hard enough and believes in herself and her cause. By the end of the story, Amelia successfully makes a change in the way that women dress, and improves her community for the better considering the women do not constantly have to worry about fainting, or lugging around 40 pounds of clothes each day. Reading this book should empower students and show them that it is possible for them to make a change. After reading this book students will realize they can do absolutely anything they set their mind to.

A fun extension activity one could do with their students after reading, "You Forgot Your Skirt, Amelia Bloomer!" is on a nice day, bring students outside. Bring a variety of large clothing such as sweatshirts, shirts, etc... as well as a backpack full of heavy items. Have students have a relay race wearing these items, running to the cone, and then handing off the items to their teammates. After students have this relay race, have a class discussion on how difficult it was to run with these items, and explain that the way they felt is similar to the way women felt in the mid-nineteenth century when they were forced to wear these uncomfortable outfits. This will give students insight on what women had to deal with back then, and why it was important that changes were implemented.
Posted by Unknown