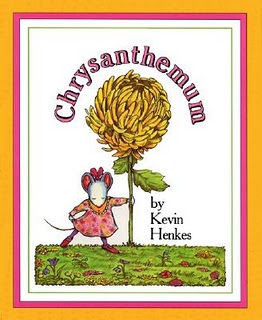 Summary:  “Chrysanthemum”, written by Kevin Henkes, is a story about a little girl mouse named Chrysanthemum who absolutely loved her name and thought it was perfect.  Once she started kindergarten though, her opinion changed about her name because her fellow classmates would tease her and tell her that her name was too long and she was a flower. She started to dislike her name because of the hurtful things her classmates were saying to her.  Until she met Mrs. Twinkle, the music teacher, who all of her classmates loved.  Mrs. Twinkle told the class that she has a long name too and that if she has a baby girl that she is naming her Chrysanthemum.  Once the children heard what Mrs. Twinkle said, they began to change their opinions and stopped saying hurtful things to Chrysanthemum.  The class ended up changing their names to names after flowers and Chrysanthemum was able to love her name again.

Element Five:  This book represents the element 5 of “Raising Awareness” because it identifies the main character Chrysanthemum being bullied by her classmates.  Students are able to learn about the affects of bullying and how it can make people feel who are being bullied.  Students may not truly understand the affects of the hurtful words that they are saying to someone.  Chrysanthemum expressed her sadness with her parents about how her classmates were treating her which allows for the students to understand that the harmful words were really affecting her.

Activity:   An activity that would work for this story would be the “Wrinkled Heart”.  The activity would start by the teacher passing out a heart made out of construction paper to each student in the class.  The teacher would explain to the students that while the story is being read, that every time they hear the children in the book teasing or bullying Chrysanthemum, to either crumble or tear the heart.  Then every time they heard the children in the story say something nice to her, to try to smooth out the heart.  At the end of the story, the teacher would pass out band-aids and have the students try to fix the heart and make it flat and smooth again.  Then the teacher would explain to the students that no matter how many times they tried to smooth out the heart, it would never be perfect again.  This activity would be great for the students to understand bullying, and they would be able to raise awareness by trying to stop bullying. It shows the students that when they say hurtful things to someone that the words will always affect them and they can never be taken back.  A good follow up activity for this would be to have the students think out loud as a class ways that they could prevent bullying.