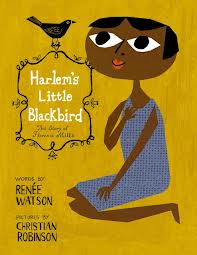 
Summary:
Florence Mills, a descendant of slaves, found her voice at a very early age, singing spirituals with her mother to chase away the storms.  She loved to sing and dance on the playground at school and soon began performing in local contests in Washington D.C., sharing her bird-like voice with all.

But due to segregation, at her first big performance, she was told her family and friends were not allowed into the "Whites Only" theatre.  Florence realized that she could use her voice not just for entertaining, but for voicing her opinion of right and wrong.  She threatened not to perform if her friends and family could not attend.  And so they were allowed in.

As her fame grew, so did the strength of her voice.  From New York to London, Florence used her gift to sing for equal rights, inspiring many to do the same.


Element 4, Social Movements and Social Change:
Florence Mills, not only an everyday person, but a poor, black everyday person living in the early 1900s, used her success as a performer to sing for equality.  Thousands heard her bird-like, peaceful cries for social change, from the United States to Europe, all without youtube.

According to her website, her performances were never filmed nor are there any existing quality recordings of her voice.  However, thanks to author Renee Watson and illustrator Christian Robinson, her message continues to reach thousands more.


Activities:
Students can read, discuss, and analyze the words to her song, "I'm a Little Blackbird Looking for a Bluebird".

Students can put on a play based on the life of Florence Mills, as depicted in the book, highlighting the talents of each individual student:  actors, singers, set design, sound, ushers, etc.

Students can use cut-paper, in the style of the book's illustrator, Christian Robinson, to each design their own PlayBill for the show.