I Could Do That!: Esther Morris Gets Women the Vote 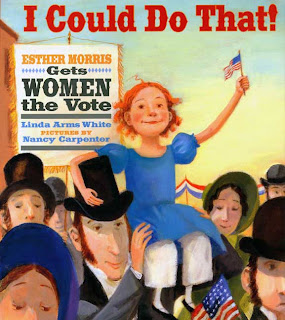 Summary:
Esther Morris believes she can do anything and proves she can.  At six Esther is told she is too young to make tea.  Her reply? “I could do that!” and she does.  At nineteen she is told she is much too young to open up her own business.  What is Esther’s reply? “I don’t see why” and she opened a hat shop.  Esther then marries and has a son.  When her husband passes away Esther moves to Illinois and tries her hardest to claim her late husband’s land but is denied her inheritance because she is a woman.  In 1869 Esther moves to Wyoming.  In Wyoming, Esther sees a proclamation stating “ALL MALE CITIZENS 21 AND OLDER ARE CALLED TO VOTE IN THE FIRST TERRITORIAL ELECTIONS.”  What Is Esther’s reply? “Is’s time I did that.”  From that point forward Esther makes getting women the right to vote her goal.  She holds meetings and persuades the candidates for territorial legislate to agree to introduce a bill for women’s rights.  After letters and visits the bill is finally signed on December 10, 1869, and women in Wyoming get the right to vote thanks to Esther.  When the county’s justice of the peace resigns, refusing to administer justice to a place that allows women to vote, Esther takes his position and becomes the first women to hold office in the United States.  Esther Morris can do anything!

Element Four:
Element Four, social movements and social change focuses on teaching students about the everyday and iconic people who worked together to stand up for what they believed in to create change.  “I Could Do That!: Esther Morris Gets Women the Vote,” is a wonderful representation of element four.  The story of Esther Morris teaches children that they can do the unexpected.  It also teaches them that if they fight for what they believe in they can make a difference and create change.     Many of Esther’s accomplishments were not typical of a woman in the 1800s because of the societal restrictions women had placed upon them.  However, Esther challenges the norms of the time and opens her own business, moves out to Illinois as a single mother, gets women the right to vote in Wyoming, and becomes the first women in the United States to hold public office.  Although Esther is a historical figure she is not famous like Elizabeth Cady Stanton or Susan B. Anthony and teaches children that anyone can create change by taking action.

Activity:
To incorporate “Could Do That!: Esther Morris Gets Women the Vote” into the classroom, children can have a class discussion about stereotypes.  Children can be asked questions like, “What is a stereotype?” “What did people during Esther’s time believe women could not do?”  “Is there anything women cannot do today?” After the discussion and breaking down any stereotypes children may have, the teacher can present students with the stereotype that children cannot make a difference.  Ask them how that makes them feel then share with them a few examples of how children created big change.  Use examples like the Fair Trade Chocolate Project.