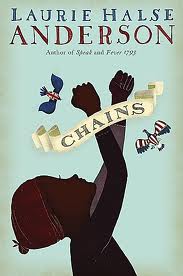 
Summary: This story is about a 13-year-old slave named Isabel. This book takes place during the American Revolution. Once their original owner died, Isabel and her sister were traded to new owners, Mr. and Mrs. Lockton. They were both Loyalists who pretend to be Patriots while living in New York. Isabel and her sister were worked incredibly hard, especially by Mrs. Lockton, who was extremely cruel to them. Curzon, a slave boy has an idea to spy on Mr. Lockton to prove that he is a Loyalist, and asks Isabel to help him expose Mr. Lockton. Curzon told her that if she could prove this, Isabel and her sister would be able to gain freedom at the end of the war. Isabel found that since she was a slave not many people paid any mind to her, so she was able to spy on Mr. Lockton without any trouble. She found out that he had plans to kill George Washington and took evidence of it to the Patriots. This caused Mr. Lockton and many others that were involved to be shown as traitors, and almost all of them fled to get away. This caused Mrs. Lockton to become even more cruel, and she separated Isabel from her sister. The British had taken over New York and took many prisoners including Curzon. Isabel did her best to aid the prisoners with food and other things, but it became too hard as time went on, so she tried to flee and find her sister. She was able to break Curzon out when the British were busy celebrating the Queen's birthday and they stole a boat to leave to find Isabel's sister. The books ends in a bittersweet way because the sister's whereabouts are unknown, but Curzon and Isabel were on their way sailing to freedom.

Element 4: This element is focused on social movements and social change. This element shows iconic as well as everyday people standing together to address the issues of social injustice. This allows students to see that working together, ordinary people have united to create change. This story shows Element 4 because Isabel and Curzon come together to fight for their freedom by trying to expose their horrible owner's plans to assassinate the president. While they did not literally stand up to their owner face-to-face, they put their brains together to plot their escape to freedom. Slavery is one of the biggest social injustices that the world has ever seen. Isabel and her sister were treated horribly, and after she exposed Mr. Lockton, Mrs. Lockton separated them and sent her sister away. Isabel did all that she could to get back to her sister, so she played along until the British were distracted and was able to break out and try to save herself, Curzon, and her sister. She stood up for herself silently, but definitely left a mark on Mrs. Lockton. It is impressive that Isabel got the justice she needed to expose Mr. Lockton. Mrs. Lockton's abusive actions show that it majorly damaged her pride and left her upset and alone. Isabel did not form a big production or riot, but her actions spoke louder than words because she got we she fought for, freedom. Freedom is the biggest social change a slave can achieve.

Activity: After having my class read this book, I would have them write letters to Isabel, Mr. Lockton, Mrs. Lockton, Curzon, or Isabel's sister. They would choose one character each to write to. The student's would be able to express how they felt. Since Isabel and Curzon never did find her sister, the letters could be motivational or inspirational to give Isabel hope that she may one day find her sister. The student's would be able to show their emotions about the topic of slavery by telling Isabel and Curzon how proud they are of them for actually escaping, but also for selling out Mr. Lockton, because that could have ended a lot worse for the both of them. It could have caused them serious beatings and longer hours of work. They could also express their feelings of anger towards Mr. and Mrs. Lockton for being such cruel people and slave owners.
Posted by Unknown