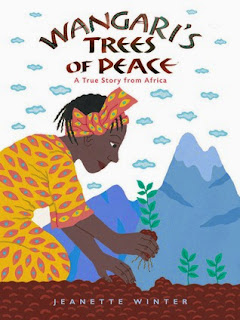 Wangari's Trees of Peace: A True Story from Africa

Summary:
Wangari grew up in Kenya under an abundance of green trees and plants that she harvested with her mother each day. Wangari was a very intelligent girl and one day she was granted with a scholarship to take her studies to America. Six years later, when she returned to Kenya, she noticed that all of the trees and crops were cut down in order to make room for buildings. Wangari witnessed women gathering firewood from miles away and hauling it all on their backs to their homes. She is sad to see her village empty and different from the way she once left it. Wangari begins planting nine seedlings in her backyard to bring back some of the trees that were cut down. Once the seedlings begin to grow, she develops her plan to plant more and convince the other women living in her village to do the same. The men who work for the government think the women are unable to plant these trees, and they continue cutting down older ones. Wangari’s movement spreads to other villages and trees begin growing everywhere. Wangari stands tall and tries to protect the old trees from getting cut down, because of this, she is beaten and put in jail. Women carry on her legacy while she remained in jail and are responsible for bringing back the green to Africa.

Element 4: Social Movements and Social Change
This children’s book clearly depicts element number four because it is based on an iconic woman who was able to start a movement with the help of her fellow village women. She was able to create change and prove that women are capable human beings. Not only was their doubt in Wangari being able to bring back life and green to her home in Kenya, but there was even more doubt because she was a female. “The government men laugh, ‘Women can’t do this,’ they say. ‘It takes trained foresters to plant trees.’” Wangari and the village women she had encouraged proved these men wrong. They were able to come together, work hand in hand and enable a great change that would one day spread to other villages in Africa. This story is a great inspiration to all of the children and adults who read it. It does a great job portraying to the readers that one person can make a difference.


Activity:
I would incorporate this book into my classroom by starting off the lesson asking my students what change they would like to see in the world, big or small. In their journals I would ask them to write a few sentences about what change they would like to see and why. We would then move onto the reading rug and read aloud “Wangari’s Trees of Peace”. After reading we would have a discussion about social movements and social change. The students would be asked why they think Wangari was able to make such an impact in her village. Students would then go back to their seats and form a plan to put the social change they originally wrote about and would like to see into motion.