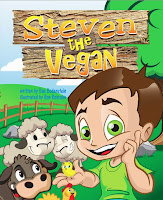 Summary:
Steven and his classmates went on a school field trip to a farm sanctuary.  When it was time to eat lunch, Steven’s friends were curious about why he was eating vegetables.  Steven educated his friends about what a vegan is, using the animals in the sanctuary as an example.  There is a lot of emphasis on the idea that animals are “friends, not food”.

Element 5: Raising Awareness
Steven the Vegan represents Element 5, Raising Awareness, because it bring many things to attention of the readers.  This book raises awareness about animal suffering (factory farming), while raising awareness of the stereotypes that go along with being a vegan.  Steven’s classmates are unaware that when they are eating pigs when they eat bacon, ham, or pork chops. He brings to attention, the different animals that are vegan (elephants, giraffes, and gorillas).  With the vibrant illustrations and various details, this book paints a picture for a healthier, friendlier, and alternative lifestyle.

Activity:
Teacher will create a KWL chart WITH the students. There will be an entire class discussion and each student will be able to identify what they know, want to know, and have learned about being a Vegan.
Posted by Mona Atshan