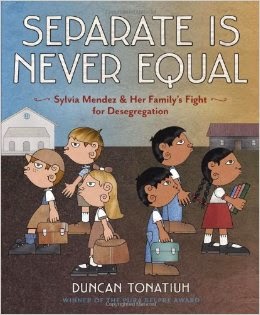 More information about this author can be found here

Other books this author has written can be found here

Excellent teacher resources can be found in the back of the book.

Sylvia Mendez and her family are new to the city of Westminster. They moved there in the summer of 1944, after their father leased a farm. When it came time to register for a new school, they drove up to a beautiful facility, complete with a fun playground and a wonderfully clean and spacious interior. However, they are confronted with the news that Sylvia and her brothers are not allowed to attend the school because they are Mexican. Sylvia does not understand this because she is an American who spoke perfect English and her father is a U.S. citizen. Mr. Mendez tries to take action into his own hands. Mr. Mendez speaks with various officials within the schools, but nobody is providing a valid reason why his children cannot attend the White schools. Sylvia and her brothers are forced to attend Hoover Elementary, the Mexican school, which was situated in a shack with barely any room, unclean, as well as dangerous with electric barbed wire that could shock you. Really angry, Mr. Mendez starts the Parents’ Association of Mexican-American Children group to try and get support for a joint school. This fails and Mr. Mendez gets some guidance from someone to hire a lawyer, Mr. Marcus who files a lawsuit. Four other families join the Mendez family and they take their case to court. Various people are questioned in court including Mr. Kent, the superintendent of the Garden Grove district, who explains how Mexicans are viewed as inferior to Whites. Two education specialists point out how segregation takes away from people learning more about one another. After a year, the judge ruled in favor of the Mendez family. The story makes the news and the word spreads. However, an appeal is filed and another trial commences in San Francisco. This time, support pours in from across the country from many different organizations. Again, the judge ruled in favor of the Mendez family. Sylvia becomes proud for the progress made, and awareness raised.


This book is a perfect example of taking social action and raising awareness for desegregation in schools.  Instead of giving up when everyone said that their children could not go to the White school without providing a reasonable, logical explanation, Mr. Mendez and his family tried to garner as much support from the community, which translated to a much larger outreach. Even though Mr. Mendez is not successful in getting enough signatures for his petition to garner support for integration of schools out of fear, it does not stop Mr. Mendez from spreading his message tirelessly with the help of his attorney, Mr. Marcus, to the entire county, which attracts other families with the same issue. Other families jump on board, creating a big court case involving high ranking officials from the schools. This spreads mass media attention. With the help of many large and diverse organizations, they are able to spread the message and help convince another judge that segregation in schools should not be permitted.

Fighting for what you believe in and standing up for it is an important quality to have. When you have a powerful voice and a lot of support behind you, anything is possible. A great idea is to have students, as a class, choose a topic of not only interest to them, but also something that affects them or a group of people. They should then research the topic and create a social “buzz” network that allows them to state their cause, objectives, and why it is important. Students should then spread their network around to various organizations and high ranking officials to raise awareness as to why matters should change and improve, and debunk myths and misconceptions others may have on important issues.