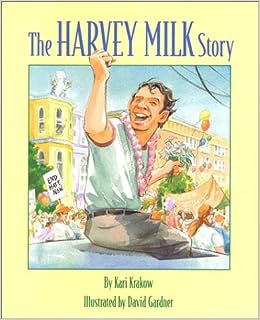 Summary:
This book is about the life and struggles of Harvey Milk, who was the first openly gay elected city official in the United States of America. Harvey moves to an openly gay neighborhood called Castro in San Francisco, and when he sees how the community has no leader and needs to fight for legal protection, he decides to run for public office. He wins the election, and fights to have a gay rights bill passed to provide legal protection over the gay community.When the bill is passed, a homophobic supervisor assassinates Harvey Milk as well as the mayor who passed the bill. The story reflects on all of Harvey's accomplishments, struggles, and his legacy that will live on forever.

Element Four:
This book can be used as an example for Element Four: Social Movement and Social Change because this story takes place during a time where the gay community was fighting for their rights and legal protection. Gay people were afraid to come out during this time period because they would have been beaten up and tormented by not only straight people but even the police, they feared their loved ones would abandon them, and there was a chance they could lose their jobs. Harvey Milk was an advocate for this social change for the gay community to earn legal protection, and he also fought for other diverse communities that were ignored by the city government, like African Americans, Asian Americans, senior citizens, and people with disabilities. He fought for social change so that everyone would feel equal and safe.

Activity:
After reading this story to the class, I would engage the students in a class discussion. I would ask them questions like "What did Harvey Milk believe in? Why was he assassinated?" After discussing these questions, I would ask them the next question which would be, "Which other historical icons were assassinated because of their beliefs? What did they believe in?". The students can share their responses, and then the next activity will be to draw a Venn diagram comparing and contrasting Harvey Milk with another historical icon who was assassinated due to their beliefs. After filling in the Venn diagram, on the other side of the paper, the students will draw pictures of Harvey Milk and their other social movement advocate. They should include symbols and even quotes that represented these iconic figures. The students can share their Venn diagrams and drawings with the class, and discuss why they chose this person and why they drew the symbols and quotes they picked. This activity will help students learn about Harvey Milk as well as other  advocates of social changes and social movements.