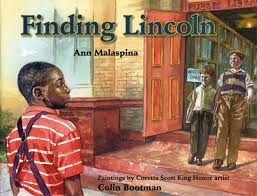 
Summary:
Finding Lincoln, by Ann Malaspina, is about Louis, a young African American boy and the troubles and triumphs he faces while living in a segregated Alabama town in 1951. One day in school he asked his teacher, “Did Abraham Lincoln shake things up when he was a boy?” the teacher didn’t know the answer so asked him to find out and write an essay. However, his resources are limited and he isn’t allowed inside of the “whites-only” library that contains thousands of books. Louis’s Mama tells him, “One day soon we’ll be checking books out of the main library. Just you wait.” But Louis was tired of having to wait for change and decides to take a stand! He enters the main library but is quickly escorted out by a librarian, who whispers for him to come back the next day at closing time. When Louis returns she sneaks him in and helps him to check out the perfect book. The librarian could have been fired or fined for what she was doing but she too decided it was time to stand up for what she believed was right.


Element #4 Social Movements and Social Change:
Element #4 is about movements of iconic and everyday people standing together to address the issues of social injustice. Ann Malaspina’s Finding Lincoln does a great job of bringing together the idea that iconic people and ordinary people can make change happen. Throughout the book there is a parallel to how Abraham Lincoln, Louis and the librarian all weren’t afraid to “shake things up”. This book shows that you don’t have to be Abraham Lincoln, Martin Luther King, or a Rosa Parks to bring about social justice. Louis taking out a book with the help of the librarian was a huge step in the right direction towards the end of segregation. It’s important to note that at the end of this book Ann Malaspina gives historical information about how John Lewis, a congressman from Georgia, recalls going to his local library in Troy, Alabama when he was a boy to take out a book. He knew he wouldn’t be allowed to but he went anyway. Lewis went on to become a leader in the civil rights movement; which shows that although this book is fiction, events similar to the one in the story really did take place.


Follow-up Activity:
I would use this book in the classroom to teach students about segregation in the United States in the 1950s. This is a good book to spark a discussion about discrimination and civil rights. I would ask the students to write about why Louis decided to enter the library and why he decided to return the next day. Would they do the same thing if they were in his shoes? I would ask them to look at the story from the perspective of the librarian and why she decided to help Louis. I would then have them research other non-fiction stories about the civil rights movement and those that decided it was time to shake things up and stand up for what they believed was right.