I am Rosa Parks, Brad Meltzer - Element 4 - Jason B. Trawinski 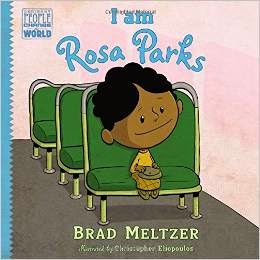 I am Rosa Parks, by Brad Meltzer
Illustrated by Christopher Eliopoulos

The story is about Rosa Parks, and details her life as both an African American youth, dealing with the inequalities of school and other facilities.  She details having trash thrown on her while walking home from school by white kids on their “all white” buses, as well as, separate water fountains and elevators.  In getting to know the girl/woman behind this very famous name, Rosa goes into detail about her decision to refuse to relinquish her seat on a Montgomery bus to a white passenger.  “The only tired I was, was tired of giving in,” explains Rosa, as she responds to the notion that exhaustion was to blame for keeping her seat.  She sparked the Montgomery Bus Boycott, where for 381 days, all blacks and some whites refused to ride public buses.  As a result, public buses were no longer allowed to separate people based on their skin color.

In element 4, teachers share examples of movements of iconic and everyday people standing together to address the issues of social injustice.  In this book, we see an example of an everyday person, who through extraordinary courage, became an icon, and sparked a movement that led to a tremendous amount of social change, and helped do away with segregation across the country.  The story of Rosa Parks is a fantastic example for early education students, as the children can truly relate to her through this look into her early life.  It is almost certain to provoke emotion, and get students fired up to learn more on the subject matter.

We would begin the lesson by looking at a brief background on civil rights, and once established, read “I am Rosa Parks” as a class.  I would ask students to give me their thoughts, and have them peer share about based on pointed questions like… “Why did Rosa not give up her seat?” “Was it fair to try and take her seat away?”  After student-to-student response, we would review thoughts as a class, and discuss the ways in which we have all stood up for ourselves in the past.  Was there change as a result?
Posted by Jason Brown Trawinski