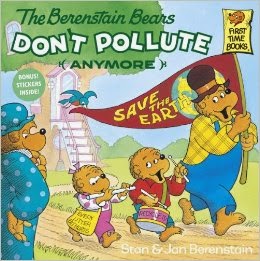 Buy it here!
Information about other Berenstain Bear books


Summary: The Berenstain Bears are a family of bears who live in bear country. They learn from the newspaper that their friend, Professor Actual Factual, believes that bear country is in deep trouble from all of the pollution happening. Brother and Sister bear decide to go see Professor Actual Factual, and he takes them on a journey to see the pollution. They see factories polluting the air with black smoke, great bear lake being polluted with garbage, and many other examples of the polluted Earth. Inspired by the pollution and with the help of Professor Actual Factual, the cubs decide to form the "Earthsavers Club" at school to help end pollution. They first make posters and bumper stickers to raise awareness to the issue and then decide hold marches and have community cleanups. Finally, the mayor of Bear Country declares a special holiday called "Earthsavers Day" to help inspire the members of Bear Country to stop polluting and they have a town parade.

Element 6: This book is without a doubt a mixture of both element 5 and element 6 due to the bear cubs also raising awareness with their club, but I think it fits well under element 6 for the main fact that the characters in the story take action in the form of creating the club, coordinating the town cleanups, and getting the mayor of their town to create an "Earthsavers Day". You can teach your students to take action the same way the Berenstain Bears were taught by Professor Actual Factual to take social action. It is also relatable to children because pollution, littering, and recycling are all major issues. They should learn about recycling in school so this is another issue that relates that maybe they could be inspired to take action about. They learn simple ideas in this book that could help them make changes in their community.

How I Would Use the Book: I would start by asking the class if anyone knew what pollution meant. I would have them write their answers on post its and stick them to the board. I would read the book out loud and after the book explains exactly what pollution is, I would ask the students to think about if they have seen any examples of pollution in our neighborhoods. After finishing the story, I would ask the class if they want to form their own "Earthsavers Club". We would brainstorm ideas on a new name for the club and make posters. Finally (school policy permitting), I would take the class on their first Earthsavers club meeting to a local park to clean up any pollution and littering. This Earthsavers club idea could go on for the whole year and extend to things such as recycling in school, conserving water, etc. It is a good way to get the class involved in taking social action.
Posted by Unknown