SIT-IN HOW FOUR FRIENDS STOOD UP BY SITTING DOWN 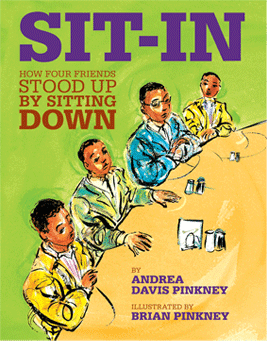 Summary: This children's book is a great example of a peaceful protest when talking about the Civil Rights Movement.  This book is about four college friends who were inspired by Dr. Martin Luther King Jr.'s words "We must meet hate with love". On February 1st, 1960 these four friends each took a seat at the Woolworth's lunch counter in hopes of being served a doughnut and coffee, with cream on the side. Although there was a sign that read "WHITES ONLY",  they still waited to be served.  The police officer could not do anything as these boys were not committing a crime or creating any harm by just sitting.  News spread about the four boys and there sit in, and the next day more students showed up at Woolworth's lunch counter. The waitresses reminded these students that only whites would be served.  This protest at Woolworth diner spread and there were other counter protests in Virginia, Tennessee, Alabama, Georgia and many others.  As more of these sit-ins grew, angry people threw hot coffee down their backs, threw pepper in their eyes and yelled at the students. Although many of the students wanted to fight back, they remained peaceful. The sit-ins were shown on television, and eventually students were arrested and taken to jail. Instead of fighting, they sang songs.  That same year, an activist Ella Baker organized a leadership conference to help students demonstrate their cause where they formed the Student Nonviolent Coordinating Committee. The book ends by talking about how President John F. Kennedy got a taste of SNCC and urged American's to start treating all people fairly, which eventually became the Civil Rights Act of 1964.

Element 6: This book is a great example of element 6 which is social action because it demonstrates students who fought for what they believed in by taking action.  The hard work and courage these four college students portrayed by peacefully protesting at Woolworth lunch counter took a stab at segregation and eventually created change.   People across different states started to protest at lunch counters for the same cause. By 1964, The Civil Rights Act became a law which banned segregation in public places. The hard work and determination of the many college students and people fighting for what they believed in by not giving up until someone served them coffee, allowed this change to become a reality. This book stresses the importance of peaceful protests rather than violence in order to stand up for what you believe in.

How I Would Use The Book:  I would use this book to allow students to first identity important people and events of the Civil Rights Movement, but also allow students to put themselves in the characters shoes by asking them about a time they wanted something they could not have. I would ask the students what they thought it would be like to be a protestor?  I would use this personal connection to start talking about peaceful protests, and how African American's who engaged in peaceful protests were able to achieve greatness and ultimately what they wanted. In the back of the book, there is a Civil Rights Timeline which talks about many historical figures that also engaged in peaceful protests in relation to segregation and civil rights. Students can pick a historical figure such as Rosa Parks, Dr. Martin Luther King Jr., Freedom Riders, Mahatma Gandhi, etc., and do research on them and how there peaceful protests ultimately were successful.