Delivering Justice: W.W. Law and the Fight for Civil Rights 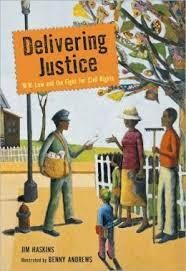 
Summary:
Delivering Justice: W.W. Law and the Fight for Civil Rights is a biography about Westley Wallace Law (W.W.) who was a mail man who lived in Savannah, Georgia during times of segregation. He had many accomplishments and was very involved in the Civil Rights Movement. W.W. had helped establish voter schools to help black people pass a test that would enable them to register. He also joined the NAACP and dedicated much of his time training people to protest without using violence. W.W. Law led the Great Savannah Boycott in 1961. Thanks to W.W. Law’s efforts and leadership, Savannah was the first southern city in the U.S. to declare all its citizens equal, three years before the federal Civil Rights Act.

Element Four -  Social Movements and Social Change:
This book is a great fit for element four for many reasons. It highlights an ordinary man, W.W. Law, who does extraordinary things. W.W. Law was a mailman in Savannah, Georgia. W.W. Law took a stand against segregation and worked with leaders of the white and black communities to work out a plan. He was committed to change and achieved his goal when Savannah was made the first city in the south to end segregation. W.W. Law achieved this through peaceful protesting.

Activity:
After reading the book aloud to the class, I would have a class discussion about segregation. I would ask them if they knew about the Civil Rights Act of 1964 and explain to them how it made racial discrimination illegal. I would ask the class, “How has the Civil Rights Act of 1964 affected us today?” I would explain how it took a lot of work to get there and how many acts of protest were involved. I would have the class chart the acts of peaceful protest or personal courage that were mentioned in the book. For example, the boycott of Levy’s store, the boycott of Broughton Street stores (The Great Savannah Boycott), the sit-in at the lunch counter, and the sit-ins at other locations as well. Finally, I would ask the class, “Would you have fought for desegregation in the same way that W.W. Law did? Would you do anything differently?”
Posted by Katie Rose A.