The Cat Ate My Gymsuit 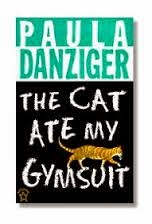 Title:  The Cat Ate My Gymsuit

Summary
Marcy is a young teen girl, growing up in the 1970s. Her father is verbally abusive, her mother is timid and doesn’t stand up for herself and Marcy has many self esteem issues related to her weight. Marcy hates everything: school, her family, and especially gym class. However, when she gets a new English teacher, Ms. Finney, who is very forward thinking, and liberal in her teaching practices (due to the movements of the 1970s) everything changes. However, when Ms. Finney is suddenly fired due to people disagreeing with her teaching practices, Marcy and her friends band together to fight the schools decision. It leads to a growing experience for both Marcy and her family as well.

Representation of the Social Justice Issue
I think this book represents social movements and social change in a very uncommon way. Rather than directly focusing on the social changes that were going on in the 1970s, from housewives changing their positions in homes, to the way people lived, and related to one another, Danziger takes an unconventional route. She shows the change, through the eyes of Marcy, and how the changes affected people everywhere. It also shows the difference students can make, when they truly believe in something. The most inspiring part, I think, is that the social movement to protest, speak to people, attend a hearing, and make their voices heard, was student led and developed. It wasn’t necessarily something the adults were already fighting that the students hopped on board with, but rather, an injustice the students saw in their school, and the actions they took to fight that, despite some of their parents’ initial reaction.

In Class Use
I would use this book with  group reading in a fourth or fifth grade classroom. It is not something I would assign students to read on their own, as some material is sensitive and requires teacher guidance and explanation. However, it would be great in conjunction with a lesson about women’s changing role in the US, student protest, and even self esteem. I would also, have students pick a topic they felt was unfair, something they maybe even felt that they couldn’t change, and turn it into a project where students made a list, like Marcy and her friends do in the book, of what they could do to make a change. This resource is great, because often times students may think that because of their family situation, their appearance or even their position as young people that they cannot make a difference. But in this story, they did.
Posted by Unknown