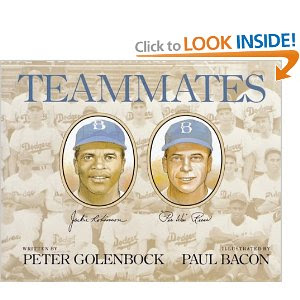 Summary:
The story is about the Negro Leagues in baseball back in the 1940's. During this time segregation was very much a reality and the men that played for the Negro Baseball Leagues faced problems such as no hotels to sleep in, no restaurants to eat at, and very little pay. Finally, some people began to challenge the racial prejudice that haunted their every day. Branch Rickey, the general manager of the Brooklyn Dodgers wanted to provide his fans with the best baseball team, regardless of color or creed. He was not afraid of change and hired a star player from the Negro Leagues named Jackie Robinson to come and try out. As Jackie Robinson agreed to come, this became known as "the great experiment". Blacks knew that his success would pave the way for others. The Southern players on his team avoided him, called him names, tried to hurt him with their spiked shoes, and he recieved threats from various organizations. Jackie Robinson did not give up and made the Brooklyn Dodgers team. However, this was only the beginning. He faced these issues throughout the season from April to September. Pee Wee Reese, another short stop on the team was threatened with the idea that Jackie could potentially take his position. However, Pee Wee iwas different and he stood up for Jackie when the rest of the team tried to sign a petition to throw him off the team. When the Dodgers traveled to Cincinnati to play, many people screamed hateful things at Jackie. Pee Wee decided to take a stand. During the game, Pee Wee walked right up to Jackie and put his arm around him. The fans gasped, but Pee Wee smiled and said, "I am standing by him, this man is my teammate."

Element 4:
Children have already learned about different social issues and now in element four they are introduced to the idea of people standing up against these social issues to make a difference. Teammates represents this element perfectly because it depicts the idea of people standing up to address the issue of social injustice. In this story the manager, Jackie Robinson, and Pee Wee Reese all took action to create the same change. Together these people of opposite race, were able to show the World that they didn't care about race or creed, and neither should they.