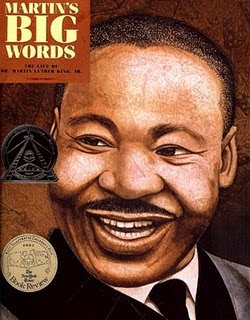 Summary: DR. Martin Luther King Jr.'s story is told in this well illustrated book, each page of the book quotes a special phrase from him. The story starts out when Dr. Martin Luther King Jr. was a young child growing up during the times of segregation, he never thought it was right for the separation between blacks and whites. He motivated blacks to stand up and fight for their rights in a non violent manner, he also marched with them for equality. Through the book there are many quotes of Dr. Martin Luther King Jr.'s beliefs for equality without harming others, he said "Love is the key to the problems of the world", this was proven in the book when he won the noble peace prize in 1964. Finally after ten years of protests, segregation ended. Dr. Martin Luther king Jr. was assassinated but, his dream lives on.

Element 4: This book is a perfect example for element 4, Dr. Martin Luther King Jr. taught individuals to fight for their rights without using violence. This is an inspirational story that shows that individuals can make a difference when they stand up for what they believe in. It also demonstrates how words can have an impact on people’s lives. Dr. Martin Luther King Jr showed that if people are passionate and work together they can make a change.

Activity: Students can write in their journals of ways they can make a difference, and stand up for what they believe in without using violence. Another activity would be to have the students listen to parts of Dr. Martin Luther King Jr.'s speech, have a discussion in groups about changes they would hope to see done in our country. The students will then draw a cloud on cardboard paper, write out their dreams (the changes they want to see done in their country) share it with the class and hang it up by strings off the ceiling.