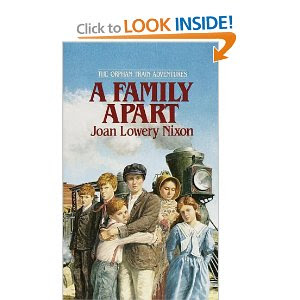 
Summary: A Family Apart is a historical fiction chapter book about six children and their mother. The time period is 1856 in New York City during the Civil War. The mother of the six children Mrs. Kelly is a young widow who is struggling to keep her family fed. She realizes she cannot keep the children and makes the decision to send them west on the "orphan train" which was a real organization which helped poor urban children find a family (better life) in the west. All of the six children feel abandoned and betrayed by their mother especially Frances Mary. The children arrive together in St. Joseph, Missouri but quickly get separated. Some children are adopted by families who are offering loving homes and others by people looking for cheap labor. Frances made a promise to her mother that she will look after Petey, her youngest brother, no matter what. She disguises herself as a boy, "Frankie" and this ultimately leads to her adventure involving the Underground Railroad. This book is part of a series of four called "The Orphan Train Quartet".

Element 4: This book is a great resource for teaching element 4. The idea of element 4 is to address issues of social injustice by allowing children to understand how ordinary people unite to create change. The six children come from a tough upbringing in the crowded city of New York where they all must work and pitch in from a very early age. The children are economically at a disadvantage and were out casted for their lack of money and their Irish descent. Through the first few chapters of the book children will understand that children were faced with a large responsibility at an early age. Continuing on throughout the story children will understand that these normal everyday kids were able to play a vital role in the Underground Railroad. Despite their rough upbringing the Kelly children have an enormous amount of courage and work together with the new people they meet and help slaves to escape due to the hardships they were facing.

Activity: (Writing) A good activity for this book would be for students to write a book review for A Family Apart. Another good writing activity for students would be a research paper about the Orphan Train and the effect it had on so many children. (Social Studies) In small groups have students make 3D relief maps of the physical land features of the United States; include the states of New York and Missouri. This is to allow the children geographical knowledge about how far the children in the story traveled.
Unit Plan Guide
Posted by Lindsay McLaughlin