Who Was Martin Luther King Jr? 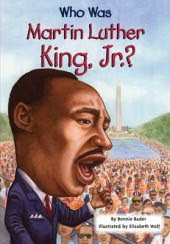 Title: Who Was Martin Luther King Jr?
Author: Bonnie Bader
Illustrated: Elizabeth Wolf, Nancy Harrison
Reading Level: 3rd-5th
Publisher: The Penguin Group
Click to Buy
More Books by Bonnie Bader
Summary: The book title is pretty self explanatory. This book is an easy to read biography of who Martin Luther King Jr was. It has stories of his childhood all the way to the "I Had a Dream" speech. It shows the adversity he overcame as a young African American during the heydays of segregation in the South. Also, there are little facts I did not know. Him and his father were named Michael Luther King. When he was five, his dad decided to change both of their names to Martin.
Element 4: Element 4 is about social movements and social change. Martin Luther King Jr. exemplifies those statements. He was someone who growing up had a very close white friend. He wanted people of all different racial backgrounds to be together. He was a role model to Leon from Leon's Story. His courage was something not only African American people could look up to, but all people.
Follow Up: For a follow up activity, I would have them write a little Who is (Insert their name here). I will ask the students while writing their little biographies, what they think they could do to make a positive impact for this world like Martin Luther King Jr.
Posted by Andrew Rohloff