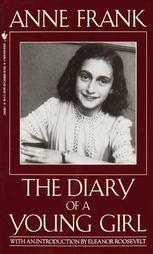 Summary: The diary of Anne frank is a story of a young Jewish girl that goes into hiding with her family because of the Nazi invasion during World War II. The Franks’ and another family lived in hiding for two year in hidden rooms above her father’s office. The hidden rooms are referred to as the secret annex. Miep a family friend would sneak food into the secret annex for the family. It was in hiding that Ann Frank wrote about her thoughts, fears and feelings about the war. Ann Frank was robbed of her youth, the Nazis discovered the secret annex and everyone was sent to concentration camps, Anne Frank was sent to Auschwitz one of the worst concentration camp during World War II. After the war Anne Frank’s dad was the only survivor of the family, Anne Frank's diary was published after World War II.

Element 3: Anne Frank : The diary of a young girls fits well with element three because it presents a different side of World War II, it is depicted through the eyes of a young Jewish girl who grew up during the war. It displays the history of World War II and shows how the Nazis persecuted the Jewish people because of their religious beliefs.

Activity: A follow up activity would be first to take the students on a field trip to the Anne Frank center in New York City have them participate in the educational program that is offered. The students would then write a letter to Anne Frank and express what they have learned by reading her diary, their feelings about World War II and how the Jewish people were treated. In class there could also be a discussion about "religious intolerance" and if it still exists today, there could also be a discussion on human rights.