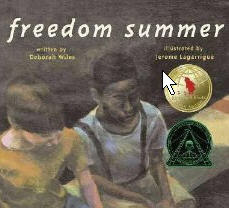 Summary: Joe, who comes from a white family, has a best friend named John Henry Waddell. John Henry’s mother, Annie Mae, works for Joe’s mother. During the summer John Henry comes to Joe’s house everyday with his mother. The boy’s love to be together. They do everything from helping to sweep the front porch, to chasing the cats out of the house, as well as to swimming together in Fiddler’s Creek. One day, after swimming in Fiddler’s Creek the boys decided to get ice pops from Mr. Mason’s General Store. However, John Henry is not aloud to go with his friend Joe through the front door. Therefore, he waits for Joe while he gets the ice pops for the both of them. That night Joe’s father tells Joe, “that the town pool opens tomorrow to everybody under the sun, no matter what color.” John Henry and Joe were so excited that first thing the next morning as soon as John Henry arrived with his mother, they ran all the way to the town swimming pool. John Henry made sure to bring his good luck nickel, so they can dive for it. However, as they approach the town pool they noticed the County’s dump trucks were there. Workers were raking steaming asphalt into the hole where the water used to be. One of the workers happens to have been John Henry’s big brother Will Rogers. They wanted to know what happened so they called out to him. As soon as Will Rogers saw them he pointed for them to get back home. They were so upset that they hid behind the tall weeds and watched all morning until the pool was all filled up. While sitting by the pool the boys discussed for the first time that no matter what the new law was, people’s hearts do not change. John Henry’s eyes filled with angry tears because he really wanted to swim in that pool. In fact, John Henry wanted to do everything that his best friend Joe could do. Joe knew that he needed to make his friend feel better. All of a sudden different ideas started to pop in his head. He came up with an idea to go to Mr. Mason’s store to get ice pops. Joe got two nickels out of his pocket one for John Henry and one for himself. As he hands a nickel over, John Henry shakes his head and insists on using his own good luck nickel. The story ends with Joe and John Henry walking through the front door together.

Element Four- Social Movements and Social Change: This book represents element four because it captures a powerful friendship between two boys, that was taken place during one of the biggest changes, the Civil Rights Act of 1964. It captures how Joe and John Henry’s friendship defies their experience with racism. There were many things John Henry could not do with his best friend Joe. Until one day, a new law passed that forbid segregation. Joe’s father happily broke the news to Joe that the town pool would open to everyone, no matter what color they were. This made Joe and John Henry so excited, that they went first thing the next morning to only discover, that it takes more than a new law to change people’s hearts. This story shows how powerful a bond between two friends of different race can be, and the lengths they would go to make a change together.

Follow up activity: Before reading “Freedom Summer,” ask the students questions regarding a friend or a best friend that they may have. For example, what type of qualities do they look for in a friend or how would they feel if their friend could do things that they weren’t aloud to do because they were different in some way? After reading the story ask questions such as what types of things have changed since then or how do you think each character felt when they saw the pool being destroyed? As a follow up activity you can split the kids up in different centers. Each center will have a biography of different civil rights leaders. Each center will also have an activity to go along with the biography whether it is to fill out a worksheet or to write in their journal how they feel about that specific civil rights leader.