Passage to Freedom: The Sugihara Story 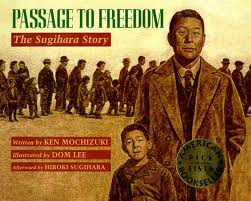 Summary: Passage to Freedom: The Sugihara Story, based on the words of Hiroki Sugihara, tells the story of how one family came together to save thousands of lives in the name of social justice. The story takes place in the 1940's when Hiroki was five years-old and his father was a Japanese diplomat to Lithuania. Hiroki's family is faced with a moral dilemma when hundreds of Jewish refugees from Poland come to Hiroki's father in desperate need of visas. Having escaped Nazi soldiers who had taken over their country, these refugees needed Hiroki's father to grant each of them visas to escape death and imprisonment by the Nazi Party, and travel through other countries. When the Japanese government denies Hiroki's father request, he, with the support of his family, makes the decision to disobey the government and save thousands of innocent lives. Hiroki's father wrote visas all day, every day, for one month until the family was ordered to leave Lithuania. In the following years, Hiroki and his family were reassigned to Germany where they were imprisoned for 18 months. Hiroki's father was forced to resign from his diplomacy, but was later chosen to receive the "Righteous Among Nations" Award in 1985.

Element # 4 Social Movement and Social Change: The story relates to Element Four as it acknowledges the social injustice of the Holocaust and one man's courageous effort to create change. Passage to Freedom: The Sugihara Story addresses the significance of coming together to work against social injustice and towards change. This story reminds children that we all have the power to create change and it empowers them to see this within themselves. Hiroki's character is one that all children can relate to and his story is one that they can learn from and be inspired by. Through reading this story, children have the opportunity to learn that, united, ordinary people have the power to create change for social justice.

Activity: As a future educator, I would use this story to teach my students about the importance of social movements and social change. This book introduces children to the idea that people have united to create change. I believe this story will encourage children to feel passionately about supporting social movements to change social injustice. After reading this story with my students, I would encourage them to put themselves in the position of the refugees and reflect on how they might feel and what they would want others to do for them. This will help students identify with those who have been mistreated, as well as with those who have taken action to create change. My overall goal would be to convince my students that social change is possible, and empower them to believe that they are capable of such action.
Posted by Josephine Chmielewski