MOSES: When Harriet Tubman Led Her People to Freedom 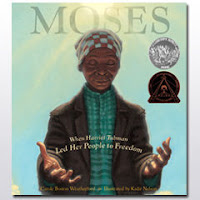 Title: MOSES: When Harriet Tubman Led Her People to Freedom

Buy it here! To get more information about the book and book reviews click here!

MOSES: When Harriet Tubman Led Her People to Freedom, is a moving story about a woman born into slavery and her journey to freedom, as well as her significant role in helping others to escape. The story begins when Harriet talks with God one summer night and gains the faith and courage to decide to flee before her master sells her to a plantation in the south. She sets out the next day to start her treacherous journey to find her freedom. Harriet hides from patrollers and dogs and walks nonstop through all her aches and pains. Every time she thinks that she wants to give up, she looks to God who is always there for support, comfort and reassurance that she will make it. Harriet Tubman finally reaches the Promised Land in Philadelphia and is a free woman. God then tells Harriet “be the Moses of your people", so she uses her gifts of strength, courage, and cleverness to show others the way to freedom.

MOSES: When Harriet Tubman Led Her People to Freedom, is a great representation of Element 4: Social Movement and Social Justice. Harriet Tubman was a strong influential leader in the 1850’s who led hundreds of runaway slaves in the Underground Railroad to freedom. This heroic woman was an ordinary slave in Maryland, who one day decided to find her freedom because she knew she had the right to. By organizing with others and getting people to stand together she was addressing the horrible conditions and treatments African Americans were forced to live in. She was leading African Americans one step closer to creating a change in the social injustices of America during this time period.

The book ways lyrical and poetic with beautiful illustrations, so for a follow up activity I would have the children construct their own poems with an illustration to go with it. The students could pick one scene in the story and write a poem in their own words while using the book for inspiration. Otherwise they are given the option to choose to write about things they learned from the book like who Harriet Tubman was, slavery, the Underground Railroad, or freedom. After the students have completed their poems and illustrations, I would put together a book for the class. The children would each get their own copy to share their work with others including their classmates and families.