Martin Luther King, Jr. and the March on Washington 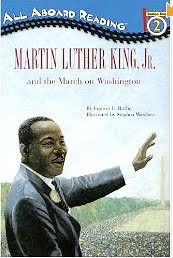 Title: Martin Luther King, Jr. and the March on Washington

To see other titles by this author click here!

More than 250,000 people from all over the United States have gathered in Washington, D.C. on August 28, 1963 to protest against the inequality that still exists in the U.S.. More than 100 years ago to the date, President Lincoln helped free the slaves during the civil war but black and whites were still not treated equally. In some states, there are laws to keep black and white people separate from each other. Black people would come together and protest these laws by sitting in seats they were not allowed to or going into “white only” public places until they were dragged out. Two black leaders named A. Philip Randolph and Bayard Rustin decided to have everyone come together on August 28th, 1963 in Washington, D.C. and protest against racial inequality. Many people give speeches about freedom as the marches sit and listen carefully. At 3 o’clock that day, a young black preacher named Martin Luther King, Jr. takes the stage. He is a man of words and does not use violence. He has led many other protests in the south against racism. He begins to give his speech talking of hopes for a better day and dreams of a better world. After his speech was finished, 250,000 people stand and clap as they are blown away by his amazing speech. The day ends and everyone goes home, but that is not the end of the fight. One year later the Civil Rights Act of 1964 is passed. This meant that there could no longer be “white only” public places. People cannot be kept apart because of their skin color. This was just the beginning of a movement that would change the world forever.

Martin Luther King, Jr. and the March on Washington represents Element 4 because it shows a social movement. People came together to make a change; they did not like the racism that was occurring in society and knew something had to be done. This book shows that when ordinary people come together, they can start a revolution and make an impact on society. Martin Luther King, Jr. has become one of the most influential leaders of all time and with the help of thousands and thousands of people they worked together to fight for what is right.

Martin Luther King, Jr. and millions of others shared a dream and were willing to go through anything to achieve it. After reading this book, have students draw a picture or write about their personal dream. Once everyone has done so, go around the room and have each student talk about their dream, why they want to achieve it and how they plan on doing so. Then compile all the papers into a “Dream Book” and students will then be able to look through the book whenever they want to read about their peers’ dreams.