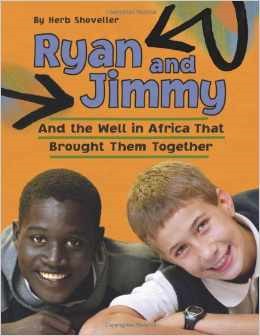 Title: Ryan and Jimmy And the Well in Africa That Brought Them Together

Learn more about Ryan and Jimmy!

Summary:
Ryan and Jimmy And the Well in Africa That Brought Them Together is a chapter book that tells the story about Ryan a six year old boy who is determined to raise enough money to build a well in Africa. Ryan had just learned in class about different people around the world and the problems which they face every day. Ryan's teacher tells them about the lack of safe drinking water in Africa and that bad water was causing the death of thousands of people including children. Ryan also learns that it would only cost seventy dollars to build a well that would supply clean water for a village. Ryan tells his parents about his new found knowledge and offers to do chores and earn money to build a well in Africa. Unfortunately building a well in Africa would cost two thousand dollars not seventy, after learning this Ryan still, determined to build a well in Africa decides to talk to more people about his plan. Ryan spreads the word in local news papers and even goes to different schools and gives speeches to other children like him who can also help and make a difference.  Ryan is able to raise enough money to build a well in a village in Africa and becomes friend with a boy named Jimmy who lives in the village where Ryan's well was built. Ryan and Jimmy continue their adventure together building more wells in Africa.

Element No. 6 - Taking Social Action:
Ryan and Jimmy And the Well in Africa That Brought Them Together is a great book to teach element No. 6 because it tells the true story about six year old Ryan whose determination changes the lives of many people. After learning that people in Africa lacked safe, clean drinking water, Ryan does chores at home to earn, what he thinks will be enough money, to build a well in Africa. After learning that it would actually cost two thousand dollars to build a well, Ryan does not give up. Ryan shares his knew found knowledge about the struggle that people have in Africa and his plan to build a well with people around his community, his story and efforts are published on the local newspaper. Ryan goes even further by traveling and visiting different schools, giving speeches and telling other children like him how they too can make a difference. Ryan is able to raise enough money to build a well in Africa and continues to raise money to build more wells and better the lives of more people.

Follow-up Activity:
After reading Ryan and Jimmy And the Well in Africa That Brought Them Together, I would give my students the web-site http://www.ryanswell.ca/about-us.aspx where they can read more about Ryan and Jimmy, students will be given time to explore the web-site in groups of two. After exploring the web-site, as a class we will choose a "School Challenge" from the web-site. We will learn about the challenge and what we need to do as a class to complete it. As a class students will prepare a speech which we will give to other classrooms in the school, to inform other students about our knew found knowledge and the "School Challenge". Other students in our school will have the opportunity to join our class in the "School Challenge".