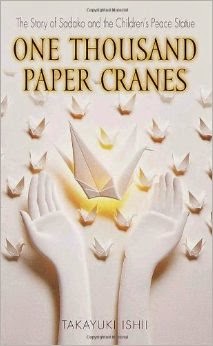 “One Thousand Paper Cranes:
The Story of Sadako and the Children’s Peace Statue”

“One Thousand Paper Cranes:  The Story of Sadako and the Children’s Peace Statue” is a non-fiction chapter book for students in 4th – 6th grade about a young girl in Hiroshima named Sadako.  Sadako was just two years old when the atomic bomb was dropped on Hiroshima.  Ten years later, Sadako Sasaki died from leukemia resulting from exposure to the bomb.  Sadako's determination to fold one thousand paper cranes and her courageous struggle with her illness inspired everyone that knew her.  This story tells of the Japanese national campaign, initiated by Sadako’s classmates, to build the Children's Peace Statue honoring Sadako and the hundreds of other children who died as a result of the bombing of Hiroshima.  On top of the statue is a girl, modeled after Sadako, holding a large folded crane in her outstretched arms. Today in Hiroshima Peace Memorial Park this statue of Sadako is beautifully decorated with thousands of paper cranes given by people throughout the world as a symbol of world peace.

This book is an excellent example of Element Five because it shows two specific examples of students coming together to raise awareness of the importance of world peace by remembering those who have died as a result of war.  This book goes beyond the traditional telling of Sadako and her paper cranes by explaining how the author’s son was read the traditional story in his classroom, and as a result, the class decided to raise money for the American Children’s Peace Statue.  Just as the children in the original story had come together to raise funds for the statue, the students of Arroyo del Oso Elementary school in Albuquerque, NM, raised funds for five years.  As a result, they were able to build a statue, “Our Hope For a Peaceful Future” in August of 1995, on the fiftieth anniversary of the dropping of the bomb.

Follow Up Activity
Have the class create a string of one hundred paper cranes to send to the Children's Peace Monument and have their class named on the Paper Crane data base.

Anyone may place paper cranes to the Children's Peace Monument in Peace Memorial Park. However, if you are unable to go to the park, they will be happy to offer your cranes to the monument on your behalf. Please send your cranes to the following address. In addition, they would like to enter your name and message for peace into the Paper Crane Database. In this way, your desire for peace will be recorded for posterity. For this purpose, please fill out this registration form and send it back to this address with your paper cranes: