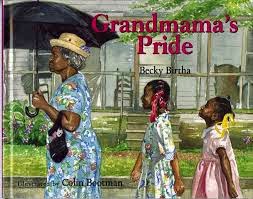 Summary: Grandmama's Pride is a story about two northern girls that go down to the south with their mother for the summer to visit their grandmama.  The two girls are very much used to no segregation laws in the north and when they get to the south they find themselves not being able to do things.  The oldest of the two girls, Sarah, throughout the summer, learns how to read.  Towards the end of the summer when the two girls go to the store with their grandmama Sarah, being able to read now can read the signs that say whites only etc.  When they return home at the end of the summer, Sarah continues to read in the newspapers all about civil rights movements taking place in the south.  The following summer when they all return to the south they find everything to be very different.  When they finally got to see grandmama, she told the girls how they black community was able to fight back and got laws passed so that there was no longer segregation.

Element 4:  This book is a great example of the struggle that the African - American community faced in the south in the 1950s.  It is also a great book to use in the classroom because the story is told through the eyes of a child and not of an adult.  Little does Sarah know that her grandmother by not taking the busses etc. is involved in a silent way of protesting what is happening.  This book shows that the smallest effort could make a difference.  It also shows how through newspapers, the whole country was becoming aware of what was happening in the south at that time.