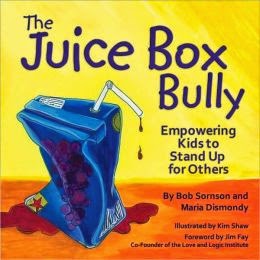 Summary:
The Juice Box Bully is a great powerful book written by Bob Sornson and Maria Dismondy, for children to become motivated and encouraged to make a difference. It shows readers’ that standing up for others is very empowering and by working together they can make a difference. This book is about a young boy named Pete who is new to a school. Pete had a bad attitude and did not want to interact with his peers. Instead Pete called them names and acted very unpleasant towards them. Despite his actions a young girl named Ruby approached Pete and explained how their class made a promise. The promise was to take care of themselves, each other, and their classroom, and to solve problems peacefully. They promised that in their class no one would stand by and accept bad behavior, instead they would speak up when someone acts hurtfully. Unfortunately Pete did not like the promise and continued acting very mean. The next day Pete complimented Ruby on her shirt, which was followed with a squirt from his juice box.  Ruby was upset and demanded everyone to break the promise but Ralph put a stop and said he would not let her do that. Pete was surprised with his reaction, and learned that Ralph was once a bully but was not a bystander and did not agree with Pete ruining Ruby’s shirt. Pete finally opens up and explains the reason why he started teasing others. Pete assumed that everyone would hate him for what he did, but shortly after, Ruby apologized and no one really hated him. Pete decided to make the promise as well and eventually apologized to Ruby.

Element 6: Taking Social Action
This book fits into Element 6 because it delivers a powerful message to readers, which is, empowering kids to stand up for others. This book is great for teachers to use within their classrooms because it provides them with an opportunity on how to handle a difficult challenging issue going on in most schools today, bullying. This book will help readers gain skills on how to create change first hand, which is primarily Element 6.

Activity:
Integrating The Juice Box Bully into a classroom is a must. Not only will I encourage my students to make the same promise as the children in The Juice Box Bully did but I would also have the class complete an activity to help them as readers retain the valuable message from this book. This activity would be to have the class create a box, imitating a juice box, and allow students to anonymously leave anything they would like to address that they felt was not right that another student did or said. As a class we can go through the box once a week and discuss these messages and come together to create a solution. This will help all students gain those skills needed to create a change and help comfort those that felt afraid to perhaps approach their peers.