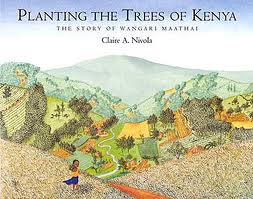 Title: Planting the tress of Kenya: the story of Wangar
Author: Claire A Nivola
Buy it
Resource
Grade Level: Pre K- 5th grade
Summary
It is a fictional Nobel based on a woman who received the Nobel Peace prize in Kenya. Her name is Wangari Maathai who made an active choice and an effort to change Kenya which is her land by educating others to take care for it. She lived in the hill by the farm in a central Kenya where was filled with fig tree, olive tree, flame tree and fish in the streams. She goes to school in America and returns back home in Kenya after five years. The landscape changed, the trees were cut down, and stream water dried up, less animals, no trace of frogs and large plantation growing for tea for business export. The store food became expensive, the neighbor grew weaker and often sickly. The clean drinking water were gone. The firewood were gone, so the cooking became difficult. The neighbor blamed each other, and the government for the shortage of resource, increase in sickness and overall difficult in life. The main character notice the problem, and raise awareness in community to protest against government plan to sell the portion of Karura forest, and to gain authority of poor and uneducated people. She says, “When we see that we are part of the problem, we can become part of the solution”. She suggest simple and big ideas to plant more trees. She taught their community how to make a hole, to prepare soil, to insert seeds and how to water them. The plant died and others were discouraged since it was their new learning experience but she taught them not to give up. Many of the women in Kenya were illiterate because they were farmer and mother, and no one really considered them importantly due to lack of education. Wangari wanted people to take initiative without the involvement of government. She wanted the community to change their own lives. Women started to work harder to plant more trees that helped the health of the community and educated the children. The men admired their wives, mother and children through their social action. He visited the prisons and the soldiers to educate them on seedling instead of bearing arms to protect something that is not their priority. Over thirty years, Wangari started a movement to plant trees, person by person and thirty million trees were plants that recovered the nature of the land.


It relates to our social element six that is about taking action on the issue they feel passionate about. They are able to make a change in the community. This story is specifically about advocating against their own government to do what they believe is right. Wangari showed that women can be more than powerful, and showed their civil rights to take an active role in changing their community environment, health and also speaking up against the government from taking away their forest.
Activity
Ask the students to bring a world map, and to find out the location of Africa and Kenya specifically. Teacher will provide age-appropriate books relating to the country of Kenya. Students will do reading on the climate and landscape of Kenya. Student will later do some research on Kenya's government system. This will broaden the student's understanding of global diversity including the way they live in which environment and their government type. The second activity is for students to learn about how to influence the government policy through a project. The project is to create a chart after imaging themselves as the women, men and children who lives in the village  in Kenya. They will brainstorm multiple ways to communicate and reach to the government to advocate and express their opinions/ideas.