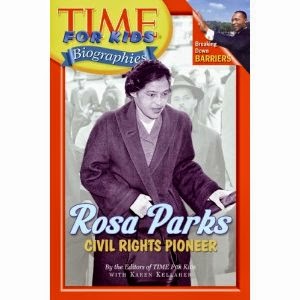 Summary:
This book is a biography on Rosa Parks.  It is split up into short chapters ranging from approximately 4-9 pages in each.  It is a very factual and easy read for children.  This can also be read as an independent read or read aloud with your students depending on the age group.  There are real photographs of Rosa Parks and people that helped contribute to her life and success.  On many of the pages there are fun facts and factual pictures that make you get a closer feel as to what was going on during her journey to equal rights.  The chapters in the book talk about background information about segregation and the diversity that was going on.  Rosa Parks grew up during slavery and disliked the idea of how everyone was not treated equally.  She decided she wanted to stick up and raise awareness on her bus boycott one afternoon.  This biography also talks about her family life, school life and her great success.


Element 5:
Rosa Parks biography is a great example of teaching Element 5: Raising Social Awareness in your classroom.  Reading this book allows for students to have an opportunity to learn about raising awareness about certain issues that feel strongly about.  This book discusses how Raymond Parks(husband) and Rosa Parks were part of National Association for the Advancement of Colored People or other wise known as the NAACP.  This group activated to raise awareness on getting equal rights for all colored people.  The NAACP all met together to discuss their mistreatment of members in society and how they could raise and spread awareness for change.  She teaches us that staying quiet about something that is unfair won't get us anywhere.  Standing up for something like inequalities should be well made aware of.  Rosa Parks is a great example of raising awareness of differences and taking the lead in activating for her community for mistreatment.


Activity:
After reading Rosa Parks Civil Rights Pioneer biography with the class, I would have a reenactment of the bus scene.  Next, I would have students align chairs up in rows and label the front section, "Whites Only".  One student would be driving the bus, others would be sitting in the front as well as in the back.  Students would get numbers and according to their numbers would determine where they sat.  One student would be Rosa Parks and another student would be the white male who was standing along with having a police officer.  We would role play a few more times so more than one student can feel being Rosa.  After reenacting, the students would go to back to their desks and write down how they felt about Rosa being asked to give her seat up.  Then together as a whole we would talk about how Rosa Parks raised awareness by doing this and getting arrested.
Posted by Unknown