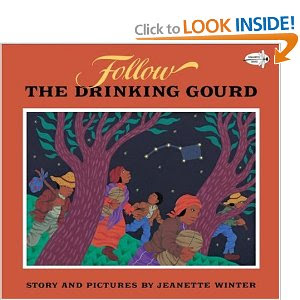 Story & Pictures by: Jeanette Winter
Grade Level: Kindergarten-3rd Grade
Buy Follow the Drinking Gourd Here!
Summary: This book tells the story about an old sailor named Peg Leg Joe, who travels from plantation to plantation in the pre-civil war South. While pretending to work under the slave masters, he teaches the slaves at each plantation a song,"Follow the Drinking Gourd". The songs lyrics are directions that, with the help from the stars, lead the slaves to a river where Peg Leg Joe awaits with a boat that carries them to begin their journey on the underground railroad. This story marks the particular journey of one family, who was going to be separated the next day, until they remember the song "Follow the Drinking Gourd".
Exploring Issues of Social Injustice: I chose this book for Social Justice Element #3, because it introduces the idea of how slaves escaped to freedom to young children, through use of the folk song, and pictures. The underground railroad made a tremendous impact on the lives of those in slavery, and this story shows how the slaves began their journey. By learning the lyrics of the song "Follow the Drinking Gourd" (which is the big dipper) the slaves were able to begin their journey to a free life. Through this story, students will learn history of slavery, and how slaves became free prior to the Civil War.
Activity: For an activity, I would like to use the actual song "Follow the Drinking Gourd", as a foundation for a map activity. Using the song lyrics, which are directions to where Peg Leg Joe awaits to carry the slaves across the river to begin their journey to freedom, I would have students create their own maps in groups on large pieces of paper. The maps will show slaves how to get to Peg Leg Joe. Students will be able to use a variety of different supplies to create their maps, and the maps will be labeled with the lyrics of the song.