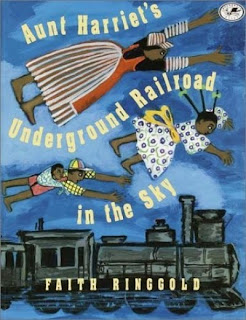 Element 3: Exploring Issues of Social Injustice
Summary
It is the 100th anniversary of the Underground Railroad and Cassie's brother, Be Be, jumps on a train in the sky that will take him to freedom in Canada. Cassie finds herself on her own journey in which Harriet Tubman gives her advice on how to take the Underground Railroad that was built 100 years ago and how to avoid the bounty hunters she may encounter along the way. This story gives an up-close and personal look on the journeys that slaves had gone through to reach freedom in Canada.
Element 3: Exploring Issues of Social Injustice
This Underground Railroad story explores the issue of slavery and racism and the effect it had on people just like Cassie and Be Be less than 100 years ago. The oppression that African-Americans faced back then reflects how they live today by honoring those who fought for freedom and by achieving greatness today. Students will understand how it was to live in a country that thrived on slavery for so long.
Activity
A fun activity that would get the kids interested and to better understand the story would be to create their own underground railroad. Each student can pick a place, whether it is their house, a local store, a place they went on vacation, or anywhere and write ways that they could help slaves on their route to freedom. Students can create codes just like in the book, draw signs that will help to point the way north, and write an explanation on how they will help the slaves on this journey.
Posted by Lisa Binz