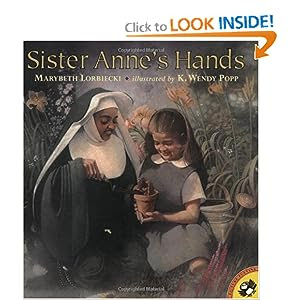 Author: Marybeth Lorbiecki
Illustrated by: K. Wendy Popp
Grade Level: Preschool -3rd grade
Publisher: Dial Books For Young Readers
Buy Here:
Resources:
Illustrator:
Summary: This story is about Sister Anne and Anna Zabrocky. Sister Anne was an African American nun that was assigned to teach second grade class during the 1960’s. Anna Zabrocky is a student in Sister Anne’s class; she admired the teacher because she was soft spoken and made learning enjoyable. Also she has never had an African American teacher, so she was exited to be in Sister Anne’s class. One day in the classroom, a student had thrown a paper airplane with racist wordings on it. The writings states, “Roses are red, Violets are blue, don’t let Sister Anne get any black on you.” Some students giggled but Anna was very upset about the incident. The next day, Sister Anne hung pictures of people who were involved in the civil rights movements; she even showed pictures of people who were shot and bleeding. Sister Anne explained to the students that racism was bad and they should not partake in it. She continued to teach at the school even though some parents withdrew their children from her class. After a while, Sister Anne moved to to teach. The lesson Sister Anne taught made Anna Zabrocky to draw pictures of different colors on hands to symbolize unity in the world.
Element Three, Exploring Issues of Social Injustice: I chose this book for element three because it deals with the issues of racism and ways to handle it in the classroom. I like how Sister Anne handled the situation in the classroom. Sometimes, children might do something bad without knowing how it would impact others. Sister Anne, posting those pictures in the classrooms showed the students how racism can result to violence. I believe she was trying to tell them not to partake in racism because it can be dangerous.
Activity: After I finish reading this book to my students, I would do an activity that involves students drawing pictures of their hands and coloring them to the shade of their skin tone. This activity is similar to Anna Zabrocky picture at the end of the story. They would cut out the hands and each student will glue their hands to a big poster, which would be provided by me. The poster would have different shades of hands all around it. This activity will signify unity and diversity of all the students in the classroom. For my second activity, I would have students write out the features that they see in themselves including hair color, eyes, beauty marks and so on. After writing these features out, each student would read what they wrote in front of the class.