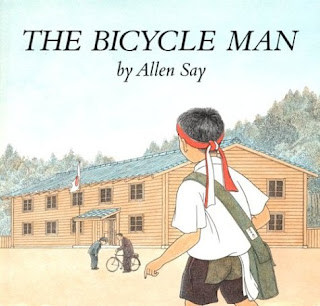 SJE: Element 2: Respect for others

Summary: This story sets shortly after the Vietnamese War at a school playground. On a nice spring day, the children are getting ready for their sports day. Before they began playing, they cleaned up the playground and put on either white or red headbands to represent the teams. They played a variety of different games while the children’s parents watched and had some tea. The games were played depending on your age and grade level. The younger ones went first and when they finished, the winners would go up to the judges and get their prize. After lunch, they kept playing more games and even the parents and teachers joined in. All of a sudden, two American soldiers appear with good intentions. But, the children were scared of them because one of them was African American and the other had bright red hair which was something they were not used to seeing. It turned out that the soldier only wanted to use the bicycle. He rode the bicycle and did so many tricks on it that the children started cheering for him. At the end, the soldier won the biggest prize and both soldiers were loved and admired by everyone from the school.

Representation of Element 2: I definitely believe that this book is a great representation of how we should have respect for others. When the two soldiers first appeared, the children were scared because they had different features and were wearing uniforms. Also, because the war had just ended, the children as well as the adults were still frightened of the Americans that were still on their territory. Even though the soldiers couldn’t speak their language, they were not disrespectful and earned their respect. By the end of the story, the children realized that they were not bad people after all and just wanted to play and have fun like they were.

Activity: Teachers could use this book to teach students about different cultures. For example, in the story we see the different games the children play compared to children from the America. As part of a lesson, teachers could ask students to compare and contrast the games that were played in the story to the games they play now. Also, the children were scared of the two soldiers because they were different. Teachers can also ask students to talk or write about a time where they were scared of someone because they looked different or even thought something negative about them. Has your attitude changed since then? And if so, why and how?