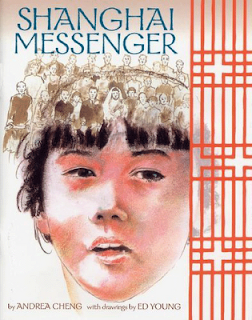 If Shanghai Messenger interests you, you can purchase it here!

Summary:
Shanghai Messenger is a story about a young girl, Xiao Mei who lives in Ohio. Xiao Mei is half Chinese, she recieves a letter from her Aunt and Uncles in China asking her to visit. Her Nai Nai (grandmother) tells Xiao Mei that she should go, at first Xiao Mei is hesitant, she does not want to go to Shanghia by herself. Eventually Nai Nai has convinced Xiao Mei that she should go, even though she was still hesitant she went anyway. During her trip to China Xiao Mei was wondering if people will stare at her because she is "American" because she has an American dad, and she also does not know how to speak Chinese. Xaio Mei is greeted by all her Aunts and Uncles that live in China, for the week that she is there she learns about the Chinese culture and starts to wish she never has to leave. When Xaio Mei leaves China and arrives home she tells her family about the different food that she ate in China as well as how the houses and lifestyle was different. Xiao Mei learned a lot about her Chinese heritage from visiting her family, when she started to unpack her things she remembered she had a note that was from Nai Nai's brother. In the note, her Uncle stated that they have two families in China and America and one day they will all get together and be one family in one place.

Element #1: Self-Love and Knowledge:
Xiao Mei is the main character in Shanghai Messenger, she learned to accept her self in America, but once asked to visit her family in China, she questions if she will be accepted there a swell. She was hesitant upon her arrival in China, wondering if people will stare at her curly hair, or judge her because she does not know how to speak Chinese. However, once she starts living with her family and learning about the way her family in China lives, she learns that she is just as accepted in China as she is in America. Shanghai Messenger demonstrates how a young girl goes off on her own to visit her home country and comes back with knowledge and insightful stories for her family in America. She now has a better understanding of her cultural background.

Follow-up Activity:
For a follow up activity I would have students compose of a poem describing who they are. It would be similar to the Where I'm from poem we have done in class, after the initial makings of their poems students will be asked to decorate their poem with pictures or other designs they feel necessary. Once the poems are completed, students will then present them to the class. By having students present their poems to each other it they will have a better understanding of who their classmates are and learn that there are many different cultures relevant in one single classroom.
Posted by Nicole Mergola