You Forgot Your Skirt Amelia Bloomer! 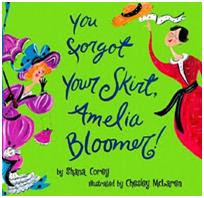 Title" "You Forgot Your Skirt, Amelia Bloomer!"
Author: Shana Corey
Illustrator: Chesley McLaren
Grade Level: k-3
Buy it here!
Resources
Summary: "You Forgot Your Skirt, Amelia Bloomer!" is a children's book that takes place in the 19th century about a woman named Amelia Bloomer. Amelia Bloomer was a feminist during this time period and this book represents her beliefs for women. She believes that "proper" ladies were silly. She believed it was silly that proper ladies could not vote and could not work. She dreaded the heavy wardrobe "proper" women wore and how hard it was to get around in such dresses. Sometimes, these "proper" women would even faint from their dresses being too tight. Amelia Bloomer knew that this had to stop! One day her friends visit her, and the outfit one of them is wearing catches Amelia's eye. Her friend was even more improper than Amelia because she was not wearing a dress. Amelia loved this idea and went to make one of her own right away! When she goes out in public without her "proper" attire on, the townspeople gasp and stare. Not too long after, almost every woman in town was wearing this new trend.
Element 4: This picture book represents Element 4 because it is an inspiring story of how one woman, Amelia Bloomer, decided to go against the social norms of society and do something that made her happy. This book is also an excellent representation of sexism and the inequalities between men and women during the time period, and how far women have come today. It teaches young children that it is okay to stand out from the crowd, and that it is okay to feel different from others. Amelia Bloomer did not want to fit in with the other women and be a "proper" lady. She did not care if she was judged as "improper," she did not want to conform to the restricted society she lived in any longer. Her decision to create a new wardrobe influenced other women in her society to also make a change. Eventually every woman she knew was walking around in the same attire. Amelia Bloomer was an ordinary lady and this shows how ordinary people have the same ability as anyone else to make an impact.
Activity: This book would be a great resource to use in the classroom if the students currently attend a school where uniforms are required. The students can write letters, or publish an article in the newspaper (just like Amelia Bloomer did) to spread their opinions about the dress code. It could also be used if the students were not required to wear school uniforms, it could be a hypothetical situation; a "How would you feel if...?"
Another activity to do in the classroom with this book would be to explore "weight" and to discuss how heavy women's clothing was back then. The class could compare how much a "dozen bricks" weighs (since that is what it is compared to in the book) to the weight of an average pair of pants, jeans, or a dress.
Posted by Caitlin Sarti