Susan B. Anthony: Fighter for Freedom and Equality 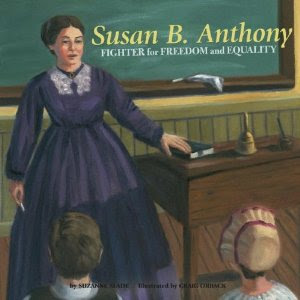 Susan B. Anthony is the focus of the biography titled “Susan B. Anthony Fighter for Freedom and Equality”. She is a historical figure that is famous for her work within the women’s rights movement. Susan was raised in a Quaker family which believed in equality and the right to an education for all. As a young girl Susan experienced inequality inside the classroom. This experience, combined with Susan’s passion for learning inspired her to become a teacher. As a working adult, Susan continued to experience inequality and discrimination. For example, a man was paid four times the amount she was paid for doing the same job. After continuous experience with discrimination, Susan B. Anthony decided to become active in the fight against discrimination. The first movement that she joined was the Temperence Movement, which sought to reduce the use of alcohol because of its negative effects on society and women. Elizabeth Cady Stanton helped propel Susan B. Anthony to the front of the women’s movement. They met in 1851 and shared similar beliefs. Elizabeth would write many of Susan’s speeches, which Susan used as a way to communicate the issues created by inequality in America. Susan’s efforts against inequality continued through the Civil War. Susan was able get 400,000 signatures on a petition during the Civil War, which helped create support for the 13th Amendment, leading to the emancipation of slaves. After the Civil War, Susan B. Anthony continued her fight against inequality, this time focusing on women’s rights. Susan would give about 200 speeches per year. Susan and Elizabeth started a newspaper called The Revolution, which was used as a means to communicate ideas that supported equality for men and women, including granting women the right to vote. As a result of Susan’s efforts, mainstream Americans began to focus more attention on the issue of inequality in America. She can be given credit for paving the way to equality for women and African-Americans.

The book “Susan B. Anthony Fighter for Freedom and Equality” is a wonderful picture book that addresses the issue of social injustice. It gives a background to the issues created by inequality in America, including sex and race discrimination. This book teaches students that regular people can create change within the world around them. Susan B. Anthony experienced inequality and decided to take action to create social change. Susan’s life provides an example of how to stand up against social injustice. It gives hope and inspiration to common people, thus inspiring a belief that they too can stand up for their rights and fight for equality.

After our Susan B. Anthony read-a-loud, the students would write in their journals to express their feelings toward our reading. Once the students are done writing, I would have them do a “think-pair-share” discussion on their thoughts, feelings, and what they have learned from the reading. As the students are discussing I would walk around and observe the students thoughts.