Champions on the Bench 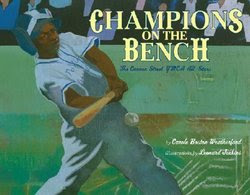 Author: Carole Boston Weatherford
Illustrator: Leonard Jenkins
Grade Levels: 2-3
This book can be purchased here!
More about the Author
Summary:
Champions on the Bench is about an African American boy, Cleveland who had just joined his first baseball team in 1955. He trained with the team in every position and ended up as the team's pitcher. When the end of the season came, Cleveland was named to the All-Star team that was supposed to go compete in state tournament and if they won that they would go on to the World Series play-off. However, when it came time for the state tournament Cleveland's team found out that the other sixty-one white teams refused to play against his all black team. The other teams dropped out of the tournament and formed an all white tournament instead. Cleveland and his team were very upset to miss this opportunity however, they were still invited to the Word Series to watch the other teams play. People in the stands cheered to let Cleveland's team play but it didn't make a difference. When the season was over they all still continued to play baseball after school. Finally, in the Major League World Series that year Cleveland watched Jackie Robinson help lead the Brooklyn Dodgers to victory. Cleveland saw this as victory for everyone.
Element 3:
This relates to element 3 because it showed how racism affected different groups people. Cleveland's team was excluded from the tournament simply because the white teams didn't want to play against his team. This book takes place a year after Plessy vs Ferguson was overturned, yet segregation and racism continued on.
Activity:
Reading this book to my class could be a good way to start into a lesson on segregation. We could begin with a discussion branching off from the book on how they would feel if they weren't allowed to play because of the color of their skin? Do they think this is fair? Why do they think Cleveland's team should be allowed to play? From here I could then teach about other places or things that were segregated at this time to help their background knowledge on this topic before moving into element 4.
Posted by Christine Rossi