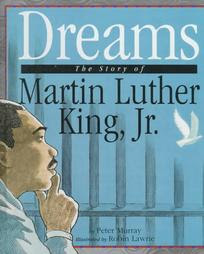 
Summary:
Dreams:The Story of Martin Luther King, Jr. was about his life leading up until his famous “I have a Dream” speech in 1963. As a child Martin Luther King experienced quite a few moments of segregation. In the book, he recalls one particular time when two of his white friends told him they were not allowed to play with him anymore because he was black. He was forced to give up seats on the bus and even in a shoe store because those seats were reserved for “whites only”. His father was a reverend and Martin Luther King Jr. admired him and what he stood for. One of the most important things he learned from his father was the phrase “You can’t be afraid of doing what’s right.” So when he got to college he decided he wanted to become a minister. Eventually King got married to Coretta Scott, and he decided he wanted to live in the south, despite the Jim Crow Laws that were in effect there. He soon moved there with his wife and became a pastor in Alabama where he preached his thoughts on the unfairness of the Jim Crow Laws. During this time, Rosa Parks took her stand against the buses and King was right there to help her out . In 1955, he helped set up the boycott of the Montgomery bus company in which he gained a lot of fame. Even though he was arrested for the boycott he was able to get rid of segregation on the bus, which was a major civil rights victory in his eyes. Before he knew it, King had become a Civil Rights Leader of America. This all led up to his famous speech in 1963, in which he proclaimed his wishes for an equal society where everyone is treated the same and segregation does not exist and everyone is free. Unfortunately in 1968, King was killed outside a hotel, but his famous speech and civil rights movement will live on forever.

Element 4:
This book relates to Element 4 because it is about one man's journey to create the Civil Rights Movement. Martin Luther King, Jr. took social injustice to a whole new level when he stood up for what he believed in and ultimately died for it in the end, which is what this element represents. Through sit ins, boycotts, civil rights marches and his famous speech he took a stand for the social injustice that was occuring at the time.

Activity: An activity that could be done using this book in a classroom, is to have the children each right their own personal “I have a dream” speech about something that they hope will change in their lifetime. Children will be able to think as if they were Martin Luther King Jr. and write about something they believe strongly about that should be changed in some way or another. In helping them think of ideas to write about, teachers should ask them questions such as "Why is that so important to you?" , or "How will that change the world we live in?"