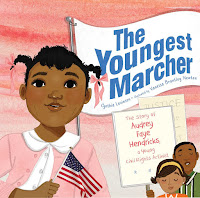 Summary:
The Youngest Marcher  is the true story of Audrey Faye Hendricks.  Audrey was a nine year old child who grew up with Dr. King coming to visit her house as well as others who were bringing dreams of justice for black people.  Audrey wanted to experience eating inside Newberry's, comfortable movie theater seats, and new school books which were only for white children. While attending church with her family Audrey heard testimony of the experiences of other black people in her community and she felt it was very unfair.  Audrey wanted to do something, but she was only a child. When Dr. King suggested a march to fill the prisons many people were afraid they would get into to much trouble so it was suggested the kids march.  Audrey was the youngest to volunteer.  She was arrested and spent a week in jail.  The children were successful and managed to fill the jail.

Element 4:
The Youngest Marcher  teaches children the social movement of the Children's March which took place May 2-7 1963 in Birmingham Alabama.  3,000 to 4.000 children were arrested during this time filling the jail.  Audrey Hendricks was the youngest known child to be arrested and jailed.  The Youngest Marcher allows students to see that even young voices can come together to make an impact in standing up for issues of social justice.  When ordinary people unite they can create change.

Activity:
The Youngest Marcher can be used to help children understand movements and demonstrations that took place during the civil rights movement.  When Audrey volunteered to march she knew that she would be spending time in jail.  After reading and discussing The Youngest Marcher have students turn and talk to discuss what they think was going through Audrey's mind when she was in jail.   Have students independently fill out a thought bubble on what they felt were Audrey's thought on the Children's March and/or, spending time in jail.