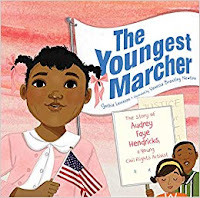 
Summary:
The Youngest Marcher is the true story of Audrey Faye Hendricks, a nine year old African American girl, who wanted to do big things that resulted in change. She was inspired by civil rights activist and ministers during her time such as Dr. King, Fred Shuttlesworth, and Jim Bevel that she too yielded the power to cause a change.  She wanted to wipe out the segregation laws in the nation, so that she too could simply eat her ice cream inside at the counter of Newberry's, sit downstairs at the Alabama, receive new school books, and sit in the plush seats of the movie theaters. Audrey could not contain herself when there was talk and plan of children being utilized to march and fill the jails. She stood in her seat of the church where Dr. King was preaching to the people to urge to march. She took part in the protest happening in Birmingham, Alabama in 1963 and was the youngest known child to have been arrested from that protest. The story tells a bit about her week's time in jail and isolation. Audrey led as the only example from her school to protest with her picket sign, eventually the jails were full and Dr. King's plan had worked and segregation in Birmingham was wiped out. Her story goes to show that you are never too young to raise awareness and make a difference.

Element Five: Raising Awareness
The Youngest Marcher is all about Audrey's bravery and courage to want to spread awareness and make a difference. She observed and listened to all of the adults around her talk about whipping out the segregation laws in the city. She could not do anything to contain herself when the idea of using the children to fill the jails was brought up. She led as the only example from her school to protest with her picket sign. She used her picket sign, "Can a man love God and hate his brother?," to spread awareness to the cause that she was protesting and defending. Audrey's story goes to show that you are never too young to raise awareness and make a difference.

Activity:
Students can create their own picket signs either protesting alongside Audrey to wipe out the segregation laws in Birmingham, Alabama or for another cause that they too want to see change in. If they choose to protest for another cause, they must present a plan to resolve their issue, just as there was a plan presented in the story. The picket signs can be done alone, with partners, or groups. The instructor will also participate and start off the activity by showing them some different ways they have created a picket sign of their own: for example if the instructor wishes to change the time allotted for lunch at the school, they should create a picket sign, "My Lunch Time Should Not Be My Crunch Time!" and present a resolution plan on how to solve the problem: finding a way to change the school's class periods by reducing 1 minute from each class and inserting it during the lunch periods.
Posted by Unknown