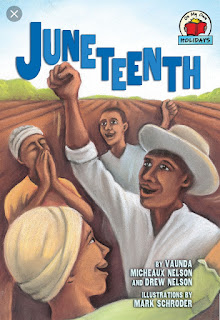 Title: Juneteenth
Authors: Vaunda Micheaux Nelson and Drew Nelson
Illustrator: Mark Schroder
Grade Level: 1st-4th grade
Buy Here For $7.99
Summary:  June 19th, 1865 began as just another day in Texas. African American slaves were working chopping wood, scrubbing floors milking cows in a barn. Then, a message arrived. Slavery had ended, they were free! Although Slavery had actually ended 2 years prior when the order was given by President Lincoln in 1863, not all slaves heard the news right away. It took more than two years for the news of freedom to reach the Texas slaves. June 19th has since then became a day of celebration in the United States, a day to remember and honor freedom from all people. The book does a great job explaining as well as illustrating Juneeteenth traditions.
Element 3:  Issues of Social Injustice: Through this book readers learn about past injustices of how black people became slaves, the war , the signing of the emancipation Proclamation and Juneteenth when all slaves became truly free.
Follow up Activity:
If used in a unit discussing celebrations: Use Vandiagrams and have students compare how Juneteenth is celebrated VS. how Fourth of July is Celebrated.