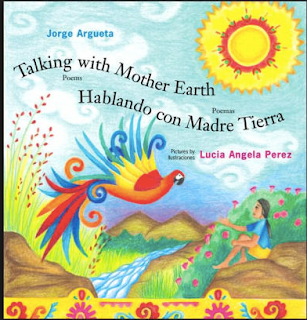 Summary: Talking with Mother Earth/ Hablando con Madre Tierra, written in English and Spanish, tells the story of a boy, Tetl, who goes through constant racism because of his Native American appearance. Because of his different features such as his brown skin, black eyes, and long hair, his classmates always taunt him. They call names such as "Cracked-foot Indian", "Flea bitten Indian", and pull on his long hair while laughing at his bare feet. From his grandmother, Tetl has learned about the spirituality of his Aztec ancestors and about how they viewed the earth as being alive with sacred meaning. From these teachings, Tetl is able to move away from the doubt and fear created by the taunts of the other children, to self-love and acceptance of his culture.

Element 1: Self Love and Knowledge: In this book, we read about the constant bullying Tetl receives from his peers because he is different then them. Tetl is able to change the negative energy given by those peers and change it into a positive one by reflecting on the teachings of his grandmother. His grandmother has taught him about his Aztec ancestry and how he can reflect on it through mother earth. Tetl understands he's different but accepts it because of how proud he is of his Nahuatl heritage. Mother earth allows him to build on to his self confidence by providing him with the strength to put the negative taunts aside.

Activity: This book can first be used as a read loud and then be extended other activities. Because this book is written into short poems, this is great for helping children understand how to write poems. Argueta openly describes the hurtful experiences that Tetl went through from the interactions with other students. Students can look into their own hurtful experiences, such as with bullying, and write it into a poem. Like Tetl does, they can relate their experiences to mother earth, and learn to love themselves more. In the end after every student has written a poem, the teacher can gather all poems to create a classroom poetry book. Students can even illustrate pictures for each of their poems.
Posted by Maritess Tapia