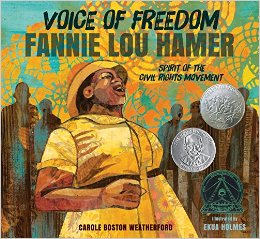 Summary: Voice of Freedom provides a look into the life of an inspiring heroine of the 1960’s Civil Rights Movement, Fannie Lou Hamer, whose treacherous contributions fought for African American freedom in a rigid, segregated nation. The youngest of 20 children in a family of sharecroppers, she was denied an education at the age of 6 to join her family in the cotton picking fields, which denied her the right to choose to better her life. Trials of Fannie’s life growing up in the South tell stories of her earliest struggles scavenging for reading material in scraps of newspaper trash when she yearned to learn, the poisoning of her family's livestock by a malicious white neighbor and being cheated out of proper pay from tampered scales fixed by her plantation boss. When Fannie unexpectedly has her womanhood taken from her, becoming unable to have children, she adopted two girls and vowed to use her voice to fight future adversities. Unsettled by the injustices she faced, Hamer became a devoted activist and member of the Mississippi Freedom Democratic Party where efforts such as marches and public sit ins resulted in jail time and harsh abuse as punishment. Hamer’s defining heroic moment was a momentous speech she gave on behalf of the Mississippi Freedom Democratic Party with the purpose of exposing the unlawful nature of Democratic National Convention Credentials Committee lack of black representation during a pivotal time for the Civil Rights Movement in 1964. Unsilenced, Hamer’s speech was televised and her statement inspired social change for blacks on a larger scale. Without Hamer’s voice of freedom, barriers for African Americans represented in political parties would have continued to oppress. A story told in poem prose, Weatherford provides the reader with vivid details, emotion and imagery that stimulates visualization for young readers.

Element 4: Social Movement and Social Change: This unique and essential biography about a lesser known, yet influential activist to such an important era of our American history can inspire students to be the one person to fight against injustice. Hamer’s unwavering courage in the face of harsh abuse and brutality endured throughout her life to right the societal wrongs made toward her people by taking action is the spirit that defines element 4 and the purpose of social justice. Even after her famous speech, denied voting rights and losing a seat in state senate, Hamer fought a system against her using only her voice until the very end. Element 4 shows students the impact of one voice and continuous small efforts that lead to a larger movement. As an ordinary person who became extraordinary through commitment to her actions, students can make connections and explore self-realization with the potential to be one agent for change. As a result, Hamer’s story as the unsung hero can empower us as a society to transform social movements into meaningful change for an equitable society in the spirit of Hamer's legacy.

Classroom Activity: Voice of Freedom is a book of prose that can provide engaging, active discussion for older elementary age students. While the book is carefully organized to showcase Fannie Lou’s life through separate poems, this is a resource that can be a supplement to discussion and writing based activities. While the book’s poems are sequential, the flexibility exists for teachers to choose certain poems to highlight as they are relevant to their unit or lesson. For example, I would use this book as a resource when teaching about the Civil Rights Movement, and after reading the book and mapping out a short timeline of Hamer’s life and accomplishments, I would choose a few poems for students to analyze in groups. In these groups they can then choose from a few prompts that pertain to their poem to compose their own response in how they would contribute to the movement or how they can contribute to a movement around an injustice that moves them in their lives. They can then either write a reflection, persuasive letter, compose an artwork, make a protest poster, or any other idea that inspires the spirit of social movement for the purposes of societal change. The class can then present their variety of strategies to each other to give snaps and praise to their great ideas. This exercise shows students that it only takes one person with one idea for change to inspire others with ideas for us all to come together and fight against injustices.
Posted by Amandamarie