As Good as Anybody 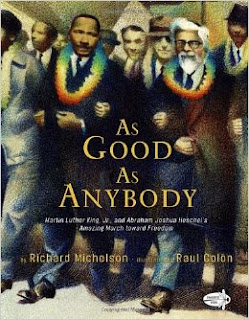 Summary
Martin Luther King Jr. grew up in a loving family in the South during a time when African Americans were not treated with kindness and a lot of doors were closed in their faces. King made it his mission in life to become a minister like his father before him and to end racial discrimination in the United States. Across the Atlantic ocean in Poland, a Jewish man named Abraham Heschel was also on a mission to end discrimination against the Jews caused by Adolf Hitler. Heschel traveled to the United States, became a Rabbi, and joined Martin Luther King Jr. in his march for social justice and together, they turned their personal experiences of discrimination into a story of equality and acceptance for all.

Element 4
This element allows teachers to share examples and experiences of movements with their students and to address the main issue of social injustice that these movements represent. Element four allows for students to explore the idea that even ordinary people can unite, do something great and create change. Martin Luther King Jr. and Abraham Heschel were just ordinary people, but they had similar beliefs and passions. They were able to transfer this passion onto other ordinary people who felt their pain and their struggle, giving them the strength to rise up and fight for a change.

Activity
This book can definitely lead into a large classroom discussion as well as a meaningful activity. To connect my students to this story and the moral of the story, I would begin by doing a read aloud of the book and a discussion afterwards. I would ask questions such as, "What was it that Martin Luther King Jr. was fighting for and why was it so meaningful to him? Why do you think he had so many supporters? What is it that King and Heschel have in common? What did they both believe so strongly in?" I would then have my students create name poems for either King or Heschel. They would take their chosen person's entire name and pick a word or adjective that describes them for every letter. For example, if a student chose Abraham Heschel, he/she would begin their poem by writing A- amazing, B- brave, R- righteous, etc. These poems would then be colored/designed and hung up in the classroom.