For the Right to Learn: Malala Yousafzai's Story 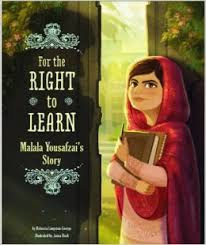 
This story focus around the life of Malala Yousafzai, a young Pakistani girl who spoke out against the Taliban that were denying girls the right to get an education.  She wanted equal education for all girls.  The story begins talking about her father who ran his own school and encouraged all his children to learn and believed that girls had the right to an education.  Education was not available to all children because they could not afford it and families would typically pay only for their son's education.  The Taliban leaders where Malala lived were against allowing girls going to schools and would intimidate school leaders like her father to either stop teaching girls or be forced to shut down his school.  Her father did not back down but some teachers did quit due to the Taliban threats.  Soon the Taliban became more vocal in their desire to deny education for all girls by stating things on the raid like, "NO EDUCATION FOR GIRLS! GIRLS WHO ATTEND SCHOOL BRING SHAME TO THEIR FAMILIES!!"  On December 2008, in Pakistan it was announced that all girl schools will close and not schools will be allowed at school.  However Malala was still speaking for equal education rights for girls and soon became a blogger for the British Broadcasting Corporation (BBC) that was looking for someone to blog about the school closings.  She used the pen name Gul Makai and would speak to a BBC reporter on the phone who would type the blog for her and the blog gained so much popularity that the BBC translated it into English for the whole world to read.  Malala was doing all of this even the fear of going to jail, being beaten or threat of getting bombed.  The violence between the Pakistan's army and the Taliban grew so much that she and her family, alongside 2 million people, were forced to evacuate in May 2009.  Three months later the fighting had ended and her and her family had returned and it looked as if the Taliban was gone and his dad resumed classes with classes for both boys and girls.  This is when Malala started becoming a know national figure fighting for the rights of equal education for women and she soon appeared on TV, radio and newspaper interview all over the world and Pakistan even renamed its peace prize to the National Malala Peace Prize in honor of her.  The Taliban were not gone and they soon began threatening her and announced to the world that Malala was on their hit list.  The police suggested that her and her family leave, but she refused to hide and remain silent about the cause she was fighting for.  Then on October 9, 2012 a member of the Taliban came rushing into of of Malala classes with a gun a she was shot three times in the head.  She was rushed to the hospital and soon required more medical surgeries and assistant and was flown to a hospital in Birmingham, England, so that she was also safe from any further attacks from the Taliban.  News of her getting shot by the Taliban spread all over the world with thousands of people sending her get well cards.  She stayed in the hospital for three more months and had many more surgeries in order to help repair drooping eye and fix her facial nerves.  After many months for recovering, Malala on July 12, 2013 gave a speech before the world leaders at the United Nations and declared this now famous quote, "One child, one teacher, one book and one pen can change the world."  Even a bullet could not silence her desire to raise awareness and fight for the right of all people, men and women, being allowed to receive an education.

This book talks about how Malala was fighting against the Taliban and society values/norms when it came to women and education.  In that women were expected to just stay at home and cook and clean and take care of the children.  Women that wanted to learn should be looked down upon and beaten or thrown in jail for wanting to learn.  Malala was raising awareness about how women were being treated in Pakistan and that they were being denied the right to and education.  She did this by at first using a pen name for a blog she was writing for the BBC about all the girl school closings and how girls where no longer allowed to attend schools and receive any form of education.  This alerted the world to what was going on there and she was raising this awareness of equal education for women, even with the threats for the Taliban and fear of being beaten, thrown in a jail or even killed.  Even after getting shot in the head multiple times by the Taliban, she lived and is still speaking out for equal education rights for all women and without her, the world may not have know the exact circumstances that were occurring in Pakistan and in other Middle Eastern countries when it came to denying women the right to an education.  Her first hand accounts provided the chance for the world to get a true understanding of what was happening and is how Malala has now become the leading figure when it comes to getting equal educational rights to all women throughout the world.

After reading the book will have a whole class discussion ask them about what their opinion is about girls like Malala being denied the right of going to school just because she was a girl.  Do they think that it's okay to not be allowed to do something just because of your gender?  For 10 minutes of so the whole class will talk about this and can write some of their responses on the whiteboard.  When this is done will use the SmartBoard and show students different examples occurring in the world today, where women are denied simply rights, such as being allowed to show their faces, just because they are women and the society they live in are telling them what they can or cannot due.  Ask students this would make them feel if they were not able to do certain things because society they were "different" or were not as seen as equal to others because of their gender?  Lastly the class will work together coming up with peaceful ideas of what they would do to gain these rights back.
Posted by Unknown