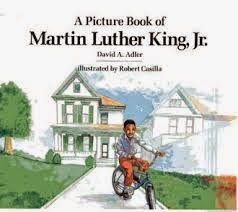 Summary
A picture book of Martin Luther King Jr. is a book for children that show the many struggles in the past history due to segregation laws and injustice. It provides student with important dates and events. This book also teaches children about Dr. King's many accomplishments and the goals he achieved throughout his life before he was assassinated. It provides student with detailed pictures and it teaches them about why there was a date declared in January as the annual federal holiday by the United States Congress to honor the life and ideals of Martin Luther King, Jr. This book is a part of other picture book biographies by David A. Adler. What I like most about this book is that it shows children how a social move made a social change; a social change that is a part of our society today.

Representation of Element Four: Social Movement and Social Change
This picture book of Martin Luther King, Jr. introduces student to social movement and social justice. its relates to social movement because Dr. Martin Luther King Jr. was one of America's greatest leaders who led the biggest march of all time in Washington to make a social change. Dr. King had dream that one day the nation we live in would not be judge by the color of their skin, but by the content of their character and because of his persistence and protests of social movement, a social change took place. This book also introduces students to the struggles that had to be overcome in order for social change to take place. This book is a great book to implement for Element Four; Social Movement and Social Change because it does not only teach student about the many struggles of the past and history, it also teaches them that today’s society is functional and desegregated because of the social movement by Dr. Martin Luther King Jr. that took place to create a social change for justice within our society. This is a great way to introduce history of social injustice and social change from the past, into today’s present and future.

Classroom Activity
An activity that would be great for this book is a match the important date’s activity. For this activity you will need the following dates written on index cards; (1929, 1947, 1953, 1955-1956, 1963, 1964, 1968, and 1983; and a plastic baggie to hold the index cards. You will also need the events that happened on each year occurrence written on a white board. These events are listed on the last page of this book along with the dates. You will also need a whiteboard with markers.

Read and review the book with the students, making sure that they understand the dates and the events that go with the date (year). On the white board make two columns. Write only the events on one side of the column leaving the other side for the dates blank. After doing this, have the students select one index card from the plastic baggie. Ask the students to match the date that they picked to the event on the white board. Once this is completed, have the student write the date they selected next to the correct event with a marker on the white board. After the student does this, have them give a brief explanation of that date and event that took place. You can also ask questions such as, do you think this is an important event?; If so why, or why not?.