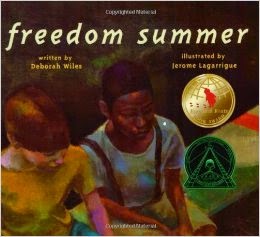 Summary:
Freedom Summer is a story based upon the experiences and observations of author Deborah Wiles as a child growing up in the south during the 60's.  In her book, Wiles introduces Joe and John Henry as two inseparable best friends.  However, there are some things that the two can't do together because John Henry is not allowed; he is a black child growing up in a time where blacks and whites are segregated.  One night, Joe and John hear that a new law has passed permitting whites and blacks to use the same facilities.  Joe and John, who both love to swim, plan to go to the town pool the next morning.  However, when they arrive the boys realize something is wrong; workers are filling the swimming pool with tar.  Joe and John Henry realize that some people would rather close the pool than let blacks in to swim.  Though the two are despondent, the story ends with John Henry courageously entering a store with Joe; something he was never able to do before.

Element 3: Exploring Issues of Social Injustice:
Freedom Summer is a moving story of the effects of segregation and The Civil Rights Act of 1964 on two young boys and their friendship.  What is so great about Freedom Summer is that it gives a realistic interpretation of how the Civil Rights Act effected blacks in America; while segregation was outlawed, this still did not end racism in America.  As we see in Freedom summer, Joe and John Henry rejoice over a new law that allows them to go to the town pool together, not realizing that it takes more than legislation to change what ideas segregation and slavery have deeply embedded into the minds of some Americans.  Freedom Summer is a great introduction to the concepts of slavery, segregation and racism because it illustrates them in a way that is appropriate for young children.  Teachers can use this book to supplement more in-depth lessons on black history, especially segregation and the Civil Rights Act, and the experiences of blacks today.

Educational Activities:
One possible activity for students includes exploring the effects of racism on how people feel and what opportunities they have.  Students can discuss questions such as: "How would you feel if you were John Henry?"  Teachers can also give students opportunities to research how segregation effected the lives of blacks pre-1964, while also expanding this concept to their own lives, "How would your life be different if you weren't allowed to do certain things because of the color of your skin?"  Lastly, teachers can use this book as a platform for moving onto Elements 5 and 6.  Because the book illustrates that racism and prejudice were not abolished with The Civil Rights Act, teachers can open the discussion of whether racism still exists in today's society.  Students can also do an activity in where they rewrite the story with the narrator as a social activist.  Generating ideas on how Joe could have changed what happened at the pool will help students come up with their own plans for taking social action.